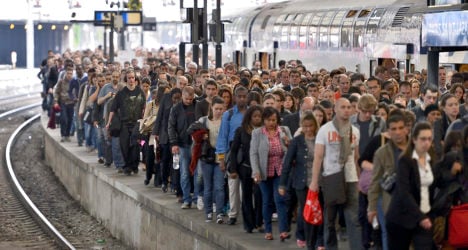 People arrive in mass at the Saint Lazare train station during a strike by French SNCF railway company employees on June 13, 2013, in Paris. Photo: Eric Feferberg/AFP

Only one TGV train out of three will be operating in certain parts of France on Wednesday, after rail unions called a 24-hour strike to protest against planned reforms to the transport system.

And already labour unions are warning the strike could go beyond 24 hours if the government doesn't bend to their demands.

"The rail workers will not go back to work without written guarantees from the government for a modified reform," Gilbert Garel, general secretary of union CGT cheminots, told France Info radio.

While the Eurostar service will run as normal, only one TGV out of three will run in the south east region of France and only one out of two in the north and east of the country.

Three out of four Thalys services to Amsterdam and Brussels will be operating. Services to Italy, Luxembourg and Spain will be hit, but trains to Germany will run as normal.

RER and TER services in the French capital will not escape disruption. Passengers heading to Charles de Gaulle and Orly airports should be ware that services on the RER B line will be hit by the strike.

“Rail traffic will also be disrupted in and around the Paris region with only one in three trains running,” SNCF warned in a statement released this week.

A planned taxi strike on Wednesday will only add to the travel chaos in the region. The taxi strike is taking place across Europe as cabbies grow angry at the rise of private hire cab firms like uber.

Several companies in France, including G7 have said they will refuse to take reservations on Wednesday.

The industrial action, which will start on Tuesday at 7pm comes just a week before the French parliament examines reforms targeting the country’s rail network and services.

The reforms are set to lay the ground work to open up France’s rail services to competition and plans to unite SNCF with RFF, the heavily indebted company in charge of the country’s track network.

France’s Transport Minister Frédéric Culliver insists the reform will allow France to “weigh in on the debate on the future of rail in Europe” while at the same time “defending a model that is 100 percent public, unified and euro-compatible”.

Cuvillier said on Tuesday the railway sector's debt currently stood at more than 40 billion euros ($54 billion), and would likely soar to 80 billion euros by 2025 if nothing was done about it.

However, union leaders claim the plans to bring together SNCF and RFF do not go deep enough and will fail to fix the debt issue.

The UNSA trade uniion, the second largest, has told its members not to take part in the strike, preferring to concentrate on "constructive negotiations". However UNSA has said it will go out on strike on June 17th if those talks fail to resolve their concerns.

You can find out if your travel plans will be affected by the strike by clicking on this link.