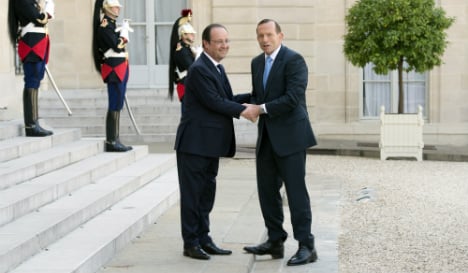 Hollande "thanked (Abbott) for his participation in the June 6th ceremonies and hailed the role of Australian soldiers who took part in the battle of Normandy alongside the Allies," the French president's office said in a statement.

Hollande said he was pleased with the "dynamism" of bilateral ties two years after Canberra and Paris signed a strategic partnership agreement.

The French leader said he wished to strengthen ties even further, notably in the economic and defence spheres.

Hollande said it would be crucial for the G20 summit taking place in Brisbane in November to "place global growth at the heart of the discussions" and further the fight against global warming ahead of the UN climate change conference to be held near Paris late next year.

The French leader also thanked Abbott "for his solidarity on the Ukraine issue and his support for France's efforts in Mali and the Central African Republic," the Elysée statement said.

Abbott was among some 20 heads of state and government who took part in events on Friday marking the 70th anniversary of the D-Day landings in Normandy.