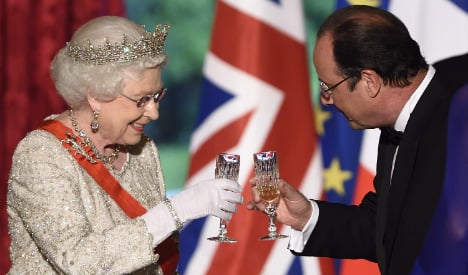 The 88-year-old British monarch spent the day in Normandy, mingling with the public and D-Day veterans and attending a series of ceremonies to mark the 70th anniversary of the invasion that changed the course of World War II.

Having sought royal guidance on what to serve, Hollande treated the queen and husband Prince Philip, 92, to a classic French meal including a starter of duck foie gras, a delicacy she loves but is eschewed on ethical grounds by her heir Prince Charles.

The foie gras, fattened liver which is controversial because geese or ducks are force-fed to produce it, was served with a gelee of Sauternes, the famous dessert wine of southwestern France that has long been a favourite of the British royals.

They were then to move on to a saddle of spring lamb from Sisteron in the heart of Provence, washed down with a top Bordeaux from the Elysee cellar.

Among the 200 guests invited to dine with the royal couple was Arsenal manager Arsene Wenger, one of the most prominent of the tens of thousands of

In a pre-dinner speech, Hollande paid tribute to the long-standing friendship between the two countries.

"The French and the British are like twins, fascinated by their resemblance, fiercely attached to their difference but viscerally united when it comes to the essentials."

Hollande, who was fresh from brokering a potential peace deal between feuding neighbours Russia and Ukraine, concluded: "I lift my glass to the great British people, ally and friend of the French people."

The queen replied, alternating between English and French, saying the two countries were linked "by this unique mix of friendship, good humoured rivalry and admiration."

She also recalled the enormous pleasure she had experienced on visiting "this beautiful country" for the first time, in 1948, when she was still a princess, recently married to Philip and pregnant with Charles.

On that visit, the queen visited a flower market in the heart of Paris which, on Saturday, is to be renamed in her honour. In the final act of her visit, she will unveil a plaque at the site before flying home for a well-earned rest.