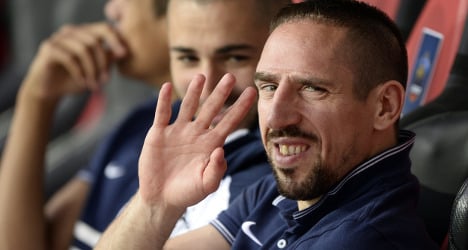 France's chances of winning the World Cup have taken a blow after its star winger Franck Ribery was ruled out with lower back problems.

Midfielder Clement Grenier has also been pulled from the squad due to a groin problem, coach Didier Deschamps said.

"This morning before the training session … (Ribery)  had to stop, the pain was too strong," he told reporters.

France kick off their World Cup campaign on June 15 against Honduras and will later face off against Ecuador and Switzerland.

Ribery was key to the team’s qualifying for the tournament in Brazil, scoring five goals and setting up many more for his teammates.

The Bayern Munich midfielder has been suffering from lower back pains for several weeks, and was unable to finish the last match he played for the German team in the country's cup final last month.

Ribery and Grenier will be replaced in the World Cup French squad by Morgan Schneiderlin and Remy Cabella.

The 31-year-old Ribery was born in humble surroundings in the north coast fishing town of Boulogne-sur-Mer and became one of the biggest and most controversial stars in world football.

A fast and tricky dribbler, some say Ribery reached his peak as a footballer in 2013, but 2014 has been an injury-marred disaster.

In a remarkable 12 months last year, Ribery — whose face was scarred in a car crash as a child — was arguably the standout player in a Bayern Munich side that won five titles — the Champions League, Bundesliga, German Cup, UEFA Super Cup and Club World Cup.

Named as player of the year by European football's governing body UEFA, he was also a strong contender for the FIFA Ballon d'Or for the world's best player. In the end he had to settle for third behind Cristiano Ronaldo and Lionel Messi.

Ribery can look back with satisfaction on a stellar career. After spells at Metz in France and Galatasaray in Turkey, it was with Marseille that he first emerged before moving to Germany in 2007.

That came 12 months after he helped France reach the World Cup final. He has since gone on to win 80 caps, scoring 16 goals for Les Bleus.

The Frenchman is known as a prankster, he drove a tractor onto pitch before one of his final games for Marseille. But he has also been embroiled in controversy.

Ribery and French teammate faced charges of having sex with an under-age prostitute. After a four-year inquiry and case, the two were cleared in January this year.

He has also had numerous injuries which have severely restricted his appearances for club and country in 2013-2014.