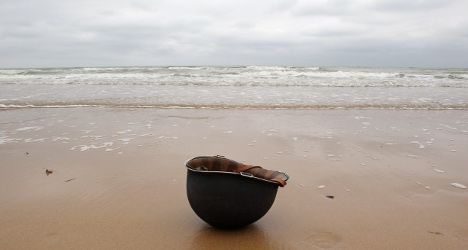 The worst of the fighting in the allied landing at Normandy was over by the close of D-Day, but the horror many of the fighters witnessed was just beginning to sink in. Many would wait years and even decades to talk about it.

Jack MacNaughton was one of the men who stayed quiet. He was a gunner aboard a navy ship in the first landings at Omaha Beach, where some 2,000 men would be killed or wounded before the day was up. They were the heaviest casualties of D-Day.

His ship was accompanying landing craft until about 300 yards out from the beach, which was being pulverized with artillery, rocket fire and machine guns. He was just 19 years old.

“Death was all around me. That was all there was. You saw these small boats get hit, they had 25 men on board. A lot of those men never set foot on that beach,” MacNaughton, 89, told The Local from his home in Apex, North Carolina. “They never fired a round out of their rifles. They either drowned or they were wounded before they got on the beach.”

The German soldiers on the shore were also firing at his boat, with shells landing some 10 yards off the bow of the vessel. He and everyone on the crew would survive D-Day, but not without a cost.

“My problem was guilt. When you go through something like that and you have made it all the way. It leaves you with a sort of guilt. Like, why me?” he said. “Somebody had to be sitting on our shoulder. All around us there was nothing but death, right up until the afternoon, that was the only thing going on.”

The burden of what he’d seen immobilized him after he got home from the war. Though he had an offer to play baseball at a college on the East Coast and an opportunity to go to Rutgers University, he turned them both down. He just wanted to stay home and do nothing.

It went on for a year like that until one day he woke up and he told his father: “Get me a job.”

For over five decades he stayed quiet about what he had seen on D-Day. But 13 years ago he and his wife went on a cruise around Europe, with one of the stops being France. When the boat arrived in Le Havre in Normandy, she convinced him to go on a day trip to the D-Day beaches.

While at the cemetery at Omaha Beach he decided to walk down to the shore to revisit the scene of the events that had haunted him for most of his life. He stood on the sand for what felt like 30 minutes and the whole day flashed through his mind again.

His only company down there was a woman whom he’d never met before and who said her husband was killed in the invasion.

By the time he climbed back up to where his wife was waiting he felt different. He felt moved enough to say something about the change.

“I said ‘Well, the rocks are gone, the rocks on my shoulders. They’re off and I can talk about it.' It opened me up. For years I couldn’t say what I told you today,” he said of his interview with The Local. “I felt it would bring back too many memories. I think a lot of people say to themselves, ‘Why did I get through this? Why am I still here?’”

SEE ALSO: D-Day Anniversary: 'We had a funeral everyday'

But now the memories aren’t only bad for him. In fact, one of them he remembers for its exceptional goodness.

Over two weeks after D-Day, as his boat was moored near the shore in Normandy, it drifted into a mine. The explosive blasted a hole in the engine room and immobilized the ship, but fortunately it didn’t hurt any of the crew.

Despite efforts to fix the boat he and the 64 other sailors and three officers aboard were stuck. The pressures of being stranded on the ship had started to tear at the crew, which began to argue and fight.

At that point an officer recognized what needed to be done and ordered the men to retrieve gloves, bats and a softball from an equipment locker. He sent them down to the beach, which by then was fully under allied control and free of fighting.

“This was D-Day plus probably 18 at Omaha Beach and we did it. We used K-ration boxes as bases and had a softball game,” MacNaughton said. “We joked around, we had a lot of fun. There were a lot of errors and lots of mistakes. But we laughed.”