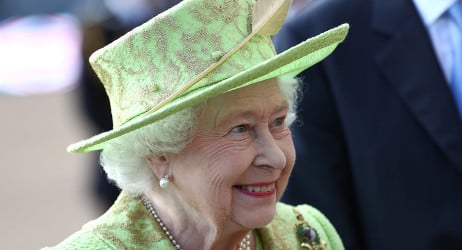 Britain's Queen Elizabeth II arrived in Paris on Thursday for an increasingly rare overseas visit that will see her feted as France's "super guest of honour" at D-Day commemorations attended by an A-list of world leaders.

The 88-year-old monarch, accompanied by her 92-year-old husband Prince Philip, stepped off the regular Eurostar train from London to an enthusiastic welcome from around 300 cheering well-wishers at the French capital's Gare du Nord.

Among them was Margaret Kittle, a Canadian whose late husband Harold fought in the Royal Air Force (RAF) during World War II.

"It's great she's here, she's the only one of the leaders who will be on the beaches tomorrow to have known the war first hand," Kittle told AFP. "I've seen the queen several times and saw her mother and father before the war in Canada when I was a girl of four. But today is really special."

Philip is the only surviving British royal who saw active service in World War II. A naval officer, he was in Tokyo Bay for the Japanese surrender.

Melody Zhang, from Beijing but studying in London, added: "I just got to know two hours ago she's coming and I rushed to try and see her. This is the first time I'm seeing her and probably the last. It's really cool I was able to be here."

As well as attending the D-Day 70th anniversary ceremony in Normandy on Friday, Queen Elizabeth will attend a state banquet at President Francois Hollande's Elysee Palace on Friday evening and have Paris's best-known flower market named after her.

France is pulling out all the stops to emphasise she is the star guest on a list that includes the leaders of the United States, Russia, Germany and a host of other nations.

"All arrangements have been made to demonstrate that she is the super guest of honour among the 33 other world dignitaries," Laurent Stefanini, the chief of protocol at the French presidency said.

Describing her as the "doyenne" of global leaders attending the anniversary, Stefanini said she would occupy the place of honour — seated at French President Francois Hollande's right — at all the events.

The special treatment included seeking the monarch's preferences for Friday's banquet menu. "Very classic French" was the request relayed back.

After her arrival, the queen was due to lay a wreath at France's national war monument, the Arc de Triomphe, before attending a garden party at which she was to bestow honours on several British and French nationals.

They included Robert 'Bob' Maloubier, a 92-year-old veteran of the wartime Special Operations Executive (SOE), who has been made an honorary MBE, and Michael Edwards, an academic and poet.

Edwards becomes a Knight Bachelor in recognition of becoming the first Briton to enter the Academie Francaise, the august body charged with preserving the purity of the French language.

On Saturday, she will have Paris's best-known flower market, next door to the emblematic Sacre Coeur cathedral, named after her.

Housed in iron pavilions, it is open seven days a week and birds are also sold there on Sundays.

"This is really an exceptional gesture because in France, we rarely name a place after living people," Stefanini said.

The trip to the market was a choice of the queen, who had visited it during an official visit as a recently-married princess in 1948. She was pregnant with the future Prince Charles at the time.

Before leaving London, she unveiled a plaque marking the 20th anniversary of the Channel Tunnel linking Britain with continental Europe.

More than 330 million passengers and 65 million vehicles have gone through the tunnel since it opened to the public in 1994, and the high-speed London-Paris rail link has made commuting between the two capitals commonplace.

For the journey, the royal couple were joined in their first-class carriage by Foreign Secretary William Hague.

Peter Ricketts, Britain's ambassador in Paris, said there was a real "warmth and affection" for the British monarch in staunchly republican France.

"The sense I get here is real excitement and pride really that the queen is coming back for this visit," he said.

Elizabeth and Philip have scaled back their overseas trips in recent years, allowing heir-to-the-throne Prince Charles and other royals to represent them.

Their last foreign visit was a one-day trip to Rome in April to see Italian President Giorgio Napolitano and Pope Francis. That trip was the first time the queen had left Britain since visiting Australia in October 2011.

The monarch's last state visit was to Ireland in May 2011, a groundbreaking trip which signalled a new era in Anglo-Irish relations.