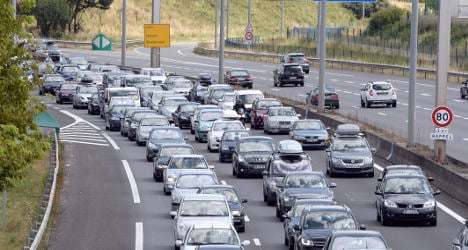 That is just what Transport Minister Frédéric Cuvillier told RTL radio, saying France should consider allowing buses, taxis and carpoolers during traffic jams to use emergency lanes (shoulders) on the outskirts of large cities.

“They [emergency lanes] are badly used and could, in a certain number of places, relieve traffic congestion,” the minister was quoted as saying by RTL on Wednesday.

The negative response from car and safety groups with quick and brutal, even though the average French driver spends two days per year stuck in 'buchons'.

"Opening another lane, in order to speed traffic up, could also push drivers to break the speed limit and thus increase the number of accidents," the group told French daily Le Monde.

The safety advocates also noted opening emergency lanes could interfere with the governments's pledge to decrease road deaths to 2,000 by 2020. France is already on its way with a record low number of traffic fatalities last year, yet nearly 3,300 people still were killed in 2013.

Currently, motorists who make unauthorized use of the hard shoulder can pay up to €135 in fines.The minister has now called for traffic-prone roads to be marked out and adapted with suitable road signs.

In spite of the backlash, there is already evidence that using emergency lanes selectively for traffic could work. A test conducted over several years with buses on the A48 highway between Lyon and Grenoble has shown positive results.

But given the reaction so far, the tests may not lead to much more in France.