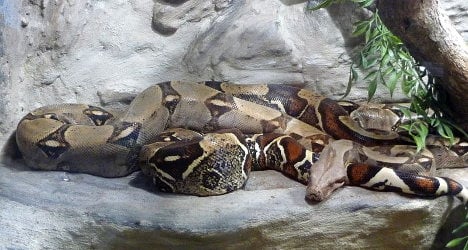 Boa constrictors are typically found in North, Central and South America as well as some islands of the Caribbean. File photo: Wikicommons

The mayor of Bourg-de-Péage in the Drôme department of south-eastern France on Wednesday lodged an official complaint for public nuisance after two separate boa constrictors were captured roaming about town in less than a month.

Now authorities will launch an official investigation, over suspicions that one of the town's 10,000 residents may be responsible for setting loose the exotic reptiles, which are capable of strangling a human.

Measuring around one and a half metres, the first deadly reptile was spotted on May 9th, according to reports in French daily Le Parisien.

As a result surveillance patrols were sent out to scout for the snake but it wasn’t until May 18th that the reptile was finally spotted in a resident’s garden and captured by the fire brigade.

A few weeks later a second boa constrictor was spotted on the side of a road by the dog of a local resident and it was captured as well.

But with no wildlife park nearby and no residents claiming ownership of the reptiles, authorities were left scratching their heads.

“So did they escape? Did someone deliberately abandon them outside to get rid of them? Is it someone with bad intentions?” Deputy Mayor Nathalie Niéson was quoted as saying in Le Parisien.

A large, heavy-bodied snake, boa constrictors are typically found in North, Central and South America as well as some islands of the Caribbean.

The species mainly feed on small animals such as rodents, birds and lizards but have been known to strangle people. While rare, several incidents have been reported in the United States since the 2000s of Boa owners being strangled by their pets.

In France the capture of boa constrictors is legal and it is possible to dispose of the creatures without alerting emergency services, according to Le Parisien.