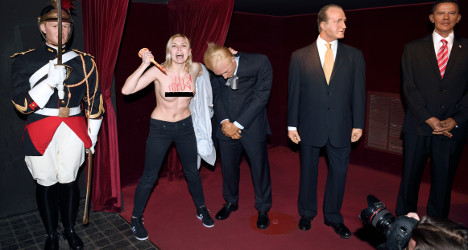 An attack by a topless member of the radical protest group Femen used a metal chisel to stab and bash in the face of Putin's statue in a famed Paris wax museum on Thursday.

The activist, who had 'Kill Putin' written on her bare chest, reportedly screamed "Putin is a dictator" while destroying the figure at the Grevin Wax Museum, French daily Le Parisien reported.

Police arrested the activist shortly after the attack, which happened near statues of US President Barack Obama and recently abdicated Spanish King Juan Carlos, both of which escaped without a scratch. Putin is to arrive in France on Thursday to attend the 70th anniversary of D-Day events, which have attracted scores of world leaders to France. Putin arrives under the cloud of the confrontation between western powers and Russia over the annexation of Crimea.

Even before the battle over the disputed Ukranian land, the Paris-based Femen have target Putin, but also high profile targets in France like the Notre Dame Cathedral and the head of the far-right National Front party Marine Le Pen.