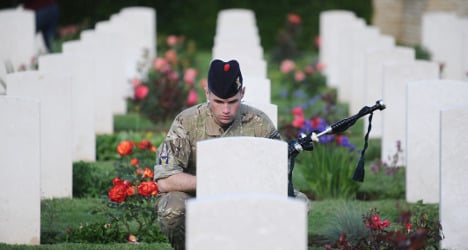 It was deceptively calm when 22-year-old James F. Sansom drove ashore in Normandy on June 11th,1944.

He was on Omaha Beach, which just five days prior had seen some of the heaviest fighting and biggest losses of the allied invasion of France. By his arrival it was a logistical hive of men, machines and supplies.

“There was still tank traps and pill boxes,” Sansom, 92, told The Local in an interview. “But things were reasonably quiet.”

Sansom’s luck would hold until that winter, when a massive surprise offensive from the Germans showed him another side of the war. At one of the lowest points during his captivity he would attend a funeral every day for a month.

The trouble started around dawn on the morning of December 17th, 1944 in Luxembourg when Sansom, a medic, and some six other soldiers woke in the hayloft of a barn they’d spent the night in. A day prior a colossal German attack had begun and it made such a dent in the allied lines that it came to be called the Battle of the Bulge.

Mortar fire had knocked out his unit's communications: “In those days all it was was just a telephone. We lost communication. And we had no idea what was going on elsewhere,” Sansom said.

The morning of December 17th a group of German soldiers with flashlights and machine guns ordered Sansom and his unit out of the barn and lined them up against the building.

“We thought that we were going to be shot,” Sansom said, remembering the German soldiers pilfering wrist watches, candy bars and cigarettes from his comrades.  “It was scary, you know, they aimed those pistols at us. You just don’t make a false move.”

Sansom didn’t realize the magnitude of what was happening until the Germans marched him away from the farm and out onto a muddy road. There he saw some 500 Americans, prisoners of war, just like him, marching with their hands in the air. Because he was a medic the Germans sent him to work in one of their field hospitals, where he was treated and fed well. There was also interaction with the German soldiers, who were fascinated by him.

“'Why the war?', they asked. They didn’t understand why Americans were on that side of the ocean,” Sansom said. “Why were we in the war? We tried to explain, but I don’t know whether I got anything across.”

From there he was shuttled to a barracks in Germany where he slept on a stone floor and lived on rations of a “half can of horse meat and bread” per day. Then he was taken into the mountains where he spent a month in another camp and saw the damage done by malnutrition and illness.

“We had a funeral every day. They just died left and right. We had 35-40 die during my time there,” he said. “It was malnutrition, some of them had been there for a couple of years. And dysentery, probably typhus, because the lice were real terrible.”

There was little the prisoners could do to keep themselves clean: “The only way you could control (the lice) was to take off your clothes and go through them and try to kill them by hand.”

But by March he and the other prisoners could hear the gunfire of the advancing allies. And on April 2nd, General George S. Patton’s troops rolled into his camp and liberated it.

Weeks later Sansom was whisked back to the United States and the war was over for him. Despite it's sudden end he has an almost crystalline understanding of what it means to him.

“I’m proud of my service. I wasn’t the best and I know that. I didn’t win the war,” he said. “I did the best I could and I was pleased that I had the good training that I had.”

Tomorrow The Local's series remembering the 70th anniversary of D-Day concludes with the story of a soldier who bore witness to the brutal killing of the first wave of the invasion.