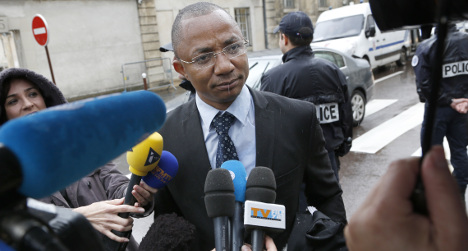 Apolin Pepiezep, the lawyer of Brussels shooting suspect Mehdi Nemmouche speaks to the press, on June 4th, 2014 outside the Appeal court of Versailles. Thomas Samson/AFP

Nemmouche, 29, was arrested in Marseille on Friday. He wants to stand trial in France and will fight a European arrest warrant issued by the Belgian authorities, the lawyer, Apolin Pepiezep told AFP.

Nemmouche's decision to contest the warrant could delay by several weeks his return to Belgium, where authorities wish to question him in connection with a shooting last week which left three people dead and another man in a critical condition with no prospect of recovery.

A first hearing on the arrest warrant has been scheduled for Thursday at an appeal court in Versailles, in the Paris suburbs.

"We want him to be judged in France, first of all because he is French and he is in France," Pepiezep said, emphasising that some of the charges Nemmouche faces, such as the illegal carrying of arms, have been brought by the French authorities.

Nemmouche was arrested in possession of a Kalashnikov and a pistol similar to the weapons used in the museum killings. He was also found to be carrying a camera on which he appeared to have filmed himself admitting responsibility for the attack, according to police sources.

"My client and I weighed up the pros and cons and agreed to oppose the request," the lawyer added. "We prefer that his case should be handled under French jurisdiction and we will argue that before the appeal court tomorrow."

The lawyer said he would not rule out an appeal in the event that Thursday's hearing results in the court supporting his client's transfer to Belgium.

Under European procedures — which are designed to be much quicker than a full extradition process — the suspect will have three days to appeal and the higher court will then have 40 days to issue a ruling on whether the handover can go ahead.