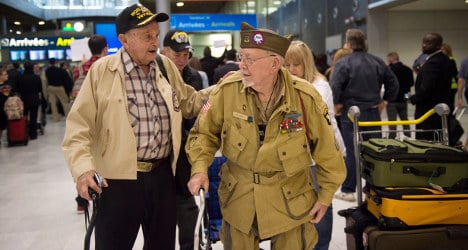 Around 1,800 of the men who took part in the decisive day of World War II will make their way to France's northern coastline this week to mark Thursday's 70th anniversary of The Longest Day.

For all but a few of them, it will be a final pilgrimage to the beaches of Normandy.

At the time, many of them were too young to buy a beer.

Seven decades later, they are not too old to have forgotten the horrors, and the heroism, that defined the pivotal 24 hours of World War II and a generation.

Fear. If there has been one sentiment that has recurred as veterans reminisced ahead of the commemorations, then that is it.

"I was as terrified as everybody else. Scared stiff," 98-year-old British veteran Ken Scott told AFP. "There was nowhere to hide."

For many, D-Day began with a leap into pitch darkness out of planes flying so low there was barely enough time for their parachutes to open before they thumped into the sandy soil of northern France.

Thousands more splashed onto beaches only to watch their closest friends cut down before them by German machine gun fire.

Many of the veterans arriving in Normandy this week are still haunted by memories etched on their psyche long before anyone had heard of Post-Traumatic Stress Disorder.

The youngest of them are now approaching their 90th birthdays and the reality is that few of them will be around for the 80th anniversary of the biggest amphibious assault in human history.

The significance of this particular anniversary has led organizers to put a special emphasis on ensuring that the memory and the lessons of D-Day are passed on to a new generation.

"We have to learn to forgive. Let's make sure that never happens again," 88-year-old Herbert Levy told an audience of nearly 3,000 local and American school students who gave the US veteran and his colleagues a welcome worthy of rock stars in a concert hall in Caen on Tuesday evening.

That was one of 400 events planned over the coming days. There is not a hotel room to be had up and down the coast and more than 12,000 police and emergency services staff have been mobilized to ensure everything passes off smoothly.

Thursday's main international ceremony of remembrance is taking place on the beach at Ouistreham and will be attended by an A-list collection of world leaders headed by Britain's Queen Elizabeth and US President Barack Obama, as well as 9,000 invited guests.

The crisis in Ukraine — in its way part of the unfinished business of World War II — means that the veterans will have to share the news spotlight with a game of diplomatic musical chairs surrounding Russian President Vladimir Putin.

But that will not stop them from paying fitting tribute to all those who put their lives on the line to ensure the success of the invasion of Nazi-occupied Europe and, ultimately, the defeat of Hitlerism.

On Thursday, a flotilla of ships will set off from Britain's main naval port of Portsmouth in commemoration of the nearly 7,000 vessels that took part in the invasion.

Weather permitting, the same day will also see a mass parachute drop at Ranville — the first village to be liberated, a vigil at Pegasus Bridge and midnight fireworks along the coast.

There will be a series of fly-pasts by historic and contemporary fighter planes along with many other re-enactments, memorial ceremonies and military processions in a part of France that has been diligent in honouring the memory of its liberators.

Russia's annexation of Crimea in March has triggered a sharp downturn in Moscow's relations with the West but there are hopes that the decision not to cancel Putin's invitation to the ceremonies could provide a catalyst for a rapprochement.

Obama is playing hard to get but British Prime Minister David Cameron, French President Francois Hollande and German Chancellor Angela Merkel have all promised Putin some face time around the main commemoration ceremony on Friday.

The Russian leader is also being pressed to meet his newly-elected Ukrainian counterpart Petro Poroshenko.

The Soviet Union's huge sacrifices during World War II made it very difficult for the West to exclude Putin from the commemorations of an assault that Soviet leader Joseph Stalin partly initiated by pushing the Allies to open up a new front that would relieve the pressure on the Red Army in the east.

Although the liberation of Normandy and France as a whole was to take many more months, sufficient progress was made on D-Day itself to give the Russians hope of turning the momentum against the Nazis.