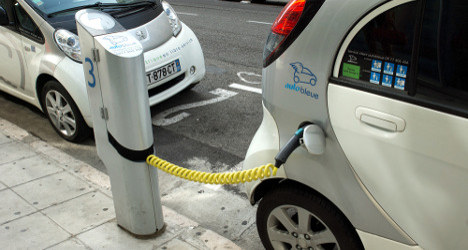 France is trying to pump some voltage into the building of electric car charging stations. Photo: Electric car.

France's love for the electric car may get some more voltage.

Lawmakers in the Senate unanimously approved on Tuesday a bill that would give local governments a bit of a tax break for constructing charging stations on public property. The states goal here is to double the number of stations to 16,000 before the end of 2015, French news site Challenges reported.

"This little text will have a big impact," said Socialist Senator Jean-Jacques Filleul. "The proposed measure is simple, technically and politically, but it will have big consequences."

One of the most frequent concerns about electric cars is the limit on their battery life and the question of finding charging stations while out and about. The problem is particularly acute in France, which has seen a boom in electric car buying, driven in part by hefty government incentives.

Nearly 8,000 new electric cars were registered and hit the road in 2013, more than double the roughly 3,000 in Germany and 2,500 in Norway. France's sales in 2013 were double those it recorded the previous year, according to government numbers.

Lawmakers from the opposition UMP party, who supported the legislation, raised the question of whether it does enough to prompt the construction of charging stations.

“While we ask the government to go even further, the UMP backs this bill to support this industry in which France distinguishes itself,” UMP Senator Louis Nègre said.

The government appears willing to do a little extra. Economy Minister Arnaud Montebourg said on Tuesday France will extend its charger station building programme, which had been slated to end at the close of 2015.

Perhaps more significantly, the government is going to make it easier for local leaders to tap into the programme's €50 million. Among other things, the scheme will now aim to provide a charging station for every 3,000 people in France.

Montebourg, who himself drives an electric car, told lawmakers debating the bill, that stations building more stations was crucial.

"Electric cars are a full tank at €2, and for which the price of batteries is destined to fall considerably," Montebourg said, AFP reported.