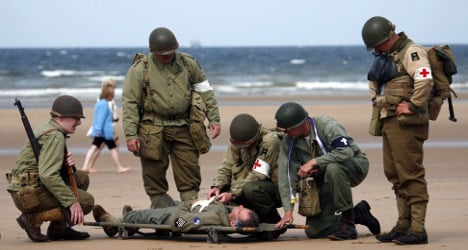 Withering gun and artillery fire, landing mishaps and mines killed some 4,500 allied men the day the invasion of Normandy began on June 6,1944.

But combat medics like U.S. Army veteran Edwin Kendrick, 93, faced those type of risks with no way to defend themselves. As a medic he was considered a non-combatant under the Geneva Convention and so when he waded ashore on June 9, 1944 he carried only his first aid kit and a red cross armband.

The fighting was still heavy in the area and as he notes it was bad enough that two men from his unit got captured almost immediately. “That’s how rough it was,” he told The Local by phone from his home in Shelby, North Carolina.

But even getting ashore was an accomplishment. When the gate on the landing craft dropped there was no way of knowing if the water was “knee deep, saddle deep or up to your neck. They were shooting artillery and everything else.”

He was 24 the day he landed in Normandy and it was his first glimpse of combat. He’d been drafted in the United States, trained and shipped to England. Then it was onto the landing craft and straight into the war.

“We didn’t know what we were getting into. There wasn’t much going on in my mind, it was pretty much blank,” said Kendrick. “You didn’t have too much time to think about it. I didn’t. If you stopped to think long enough you’d have a whole lot of fear. But I’m lucky. I came through it without a scratch.”

But there were plenty of close calls. Months after the landing, during the Battle of the Bulge, which drew its name from the dent a surprise German offense made in the Allied lines, Kendrick witnessed a miracle.

He and other troops were taking cover near some hedgerows as allied planes were called in to bomb nearby German positions. It went horribly wrong. Allied soldiers had set off a smoke grenade, which was supposed to show the bombers where to direct their deadly payload.

However, the wind suddenly shifted and sent the smoke blowing over the allied troops. Before the soldiers on the ground could call off the run, one of the bombs landed no more than ten feet from Kendrick.

He was fine, but a man on the other side of the hedgerow appeared not to have been so lucky.

“One of the bombs hit right on top of the hedgerow and covered up a boy. We had to dig him out,” Kendrick said. “We got him out. He survived and is still living as far as I know.”

Many of the others Kendrick came into contact with as a medic didn’t survive. Yet the images in his mind from the landing in Normandy and beyond have never caused him a single bad dream since returning to the US and starting a nearly three-decade career as a security guard.

“I’ve done pretty well actually. I’ve forgotten about it. I don’t try to remember any of it. That’s gone and in the past,” Kendrick said. “I let it go and I don’t think too much about it. I like to keep it out of mind.”

But the need to forget what he saw has not eliminated a desire in him to return to Normandy and see what it looks like without war. He never has made the trip and with his health fragile he’s now sure he’ll never go, but he has no regrets.

“I was glad to do it. My daddy was in World War I over there. I had two brothers in the war too and we all came out in pretty good shape,” Kendrick said. “I reckon it’s like the Bible says: you’re going to be rewarded in heaven. I’m glad I went and helped somebody out and that I made it back alright.”

Tomorrow The Local's series remembering the 70th anniversary of D-Day continues with the memories of a soldier who fell into enemy hands after he landed in Normandy.