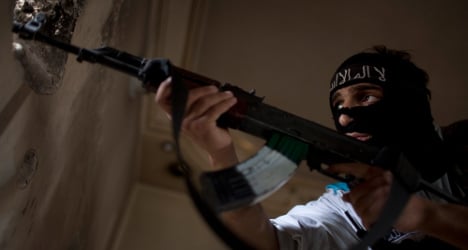 France on Tuesday increased its estimate of the number of its nationals embroiled in Syria's civil war to more than 800 and warned that they pose an unprecedented security threat.

Valls told BFMTV that the numbers of French citizens or residents who have taken part in the fighting in Syria or were planning to do so now exceeds 800, including some 30 who have died in the conflict.

"We have never before faced a challenge of this kind," Valls said. "It is without any doubt the most serious threat we face.

"We have to ensure the surveillance of hundreds and hundreds of French or European individuals who are today fighting in Syria."

Nemmouche was arrested in Marseille on Friday carrying weapons similar to those used in the Brussels attack and a camera containing a short film in which he appears to claim responsibility for the assassin-style shooting.

A visiting Israeli couple and a French volunteer at the museum were killed outright and another man, a museum employee, was left in a critical condition from which he has no prospect of recovery.

Nemmouche is thought to be the first veteran of the Syrian conflict to have carried out an attack of this kind in Europe.

Many terrorism experts have warned it is inevitable that there will be others as battle-hardened, traumatised and weapons-trained militants make their way back to France and countries such as Belgium, Denmark and Britain, which have also tracked hundreds of their citizens on the jihad trail to Syria.

Nemmouche has been compared to fellow Frenchman Mohammed Merah, the Islamist gunman who shot seven people — a rabbi, three Jewish children and three French paratroopers — in the southern city of Toulouse in March 2012.

After those killings, which have been followed by a sustained rise in Jewish emigration from France to Israel, Valls warned that the country could be harbouring "dozens of Merahs."

Asked Tuesday if he stood by that view, he replied: "Of course," but he also defended the record of the security services in preventing further atrocities.

"We have arrested individuals, we have dismantled (terrorist) cells," he said. "There have been many threats against France."

Nemmouche has been under interrogation by French anti-terrorism police since his arrest, which happened purely by chance as a result of the coach he was travelling on being subjected to a random customs check on its arrival in Marseille.

Police sources have told AFP that he has refused to answer questions.

He is due to appear in court in Versailles on Wednesday to be notified of a request for him to be handed over to Belgium under a European arrest warrant.

A hearing on the request scheduled for Tuesday could not take place because Nemmouche refused to leave his cell.

"It is a personal decision," his lawyer, Apolin Peziepep, told AFP. The lawyer said he did not expect Nemmouche to oppose the warrant.

State prosecutors on Tuesday filed a request for the suspect's detention to be extended beyond four days without charge. Such a move is extremely rare in France and requires a judge's authorisation but was not expected to raise any problem in this case.