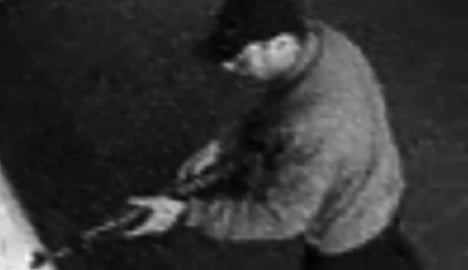 This handout videograb taken from security footage shows the suspected gunman who opened fire at the Jewish museum in Brussels on May 24, 2014 killing three people, AFP/Belgian Police

The suspected gunman, 29-year-old Mehdi Nemmouche, was arrested Friday in the southern French city of Marseille in possession of a Kalashnikov rifle and a handgun similar to the ones used in the attack on May 24, the sources said.

Nemmouche has been detained on suspicion of murder and attempted murder in connection with a terrorist enterprise, a judicial source said.

The office of the Belgian federal prosecutor confirmed a suspect was being held.

“I can confirm the arrest of the suspect,” a spokeswoman told AFP.

Simultaneous press conferences will take place in Brussels and Paris at 3:00 pm (1300 GMT).

The shooting by a lone gunman killed three people outright — an Israeli couple and a Frenchwoman, while the fourth victim, a 24-year-old Belgian man, was left clinically dead.

Customs officials detained Nemmouche at Marseille’s coach station on board a bus arriving from Amsterdam via Brussels.

“These weapons were of the type used in Brussels,” said one source. Another source close to the investigation said that “many elements are consistent with the shooting in Brussels”.

He is being questioned by the DGSI who can hold him for up to 96 hours, until Tuesday, or 144 hours, to Thursday, if investigators invoke an imminent terrorist threat.

Sources close to the investigation told AFP that during the first 24 hours of interrogation, Nemmouche remained silent.

The attack was the first such incident in more than 30 years in Belgium and has revived fears of a return of violent anti-Semitism to Europe.

Some 40,000 Jews live in Belgium, roughly half in Brussels and the remainder in the port city of Antwerp.

The profile of Nemmouche also stands to revive a row in France over the monitoring of those who leave to country to fight in Syria.

France unveiled plans in April to try to stop the increasing numbers of young French Muslims heading to fight in Syria’s civil war and becoming radicalised before returning home.

President Francois Hollande said Sunday that the suspect was “arrested as soon as he set foot in France”.

“The government is mobilised to track down jihadists and prevent them from causing more harm,” he said, adding that the action plan to fight them will “be strengthened in the coming months.”

According to the latest figures, some 780 people have left France to fight with jihadists in Syria.