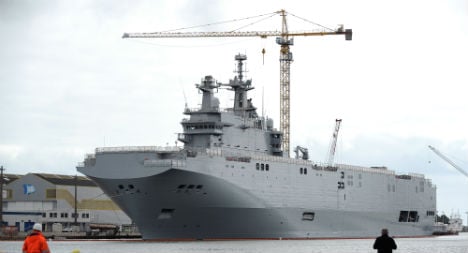 "It is critical that NATO countries no longer provide powerful weapons to enhance Russia's ability to intimidate or even invade its neighbours," the lawmakers wrote Thursday, referring to Russian President Vladimir Putin's aggression in Ukraine.

An agreement by NATO to buy or lease the ships instead "would send a strong signal to President Putin that the NATO allies will not tolerate or in any way enable his reckless moves," they added.

The lawmakers warned that the ships would "enhance the very expeditionary capabilities Russia used to capture Crimea" in March, a move strongly protested by NATO and the West.

The Mistral can carry 16 helicopters, four landing craft, 60 armed vehicles and some 700 troops.

France has said it is leaving the door open to re-examining the $1.6 billion contract in October, when the first warship is scheduled for delivery to the Russian fleet.

Rasmussen, asked about the Mistral sale at an event in Vilnius, Lithuania, said "it's for France to decide."

Engel joined Republican Michael Turner, who chairs the US delegation to the NATO Parliamentary Assembly, and William Keating, the top Democrat on a House Foreign Affairs subcommittee that deals with Europe, in signing the letter.

They acknowledged the likely financial ramifications for France should the contract be cancelled, including the loss of about 1,000 jobs.

Earlier this month, US Defense Secretary Chuck Hagel warned that Moscow was testing NATO's mettle and that the 28-member alliance must bolster its military spending to face down the challenge.

But a NATO diplomatic source said it was "not very realistic" that the purchase could be made by the alliance, whose major shared military assets are currently limited to AWACS early warning aircraft.