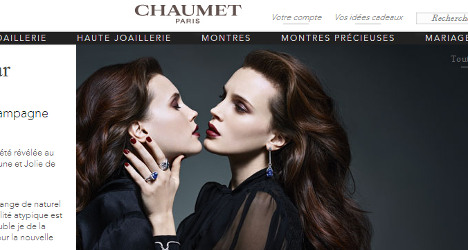 This advert is at the heart of a scandal a in French town. Photo: Screengrab/Chaumet

The advert, which is for the high-end French jeweler Chaumet, is based on the famous Greek myth of Narcissus and features actress Marine Vacth who is depicted on the verge of a kiss with…herself.

But for parents in Pecq, a town of around 17,000 residents in the Yvelines department of Ile-de-France, the advert was simply shocking.

Responding to pressure from locals, the town council then ordered the posters to be taken down from local bus stops.

Quoted by French daily Le Parisien, Mayor Laurence Bernard said she had received “many calls from parents” about the advertising campaign.

“They told us that it bothered them that their children were subjected to this image, that it shocked and annoyed them to respond to their children’s comments on the subject.”

But not everyone was content with the town hall’s decision.

“Taking down these posters is a serious offence against homosexual people,” co-president of the LGBT centre in Ile-de-France was quoted by TF1 television as saying. “We are not going to eradicate our existence, our daily lives, under the pretext that it would frighten some parents.”

Meanwhile, gay rights group SOS Homophobia described the council’s actions as “an unacceptable practice of censorship which shows and reinforces the organization into hierarchy of couples based on their sexual orientation.

“The concealment of the posters highlights a homophobia that dares not speak its name.”

Responding to the outrage, Bernard said: “I understand their anger and I’m sorry. I am appalled and sorry for the controversy that this raises. I wanted to make things more calm. I thought that by removing them, I made a step towards these residents and that I could get them to accept the evolution of society without rushing them.

“I think that those who asked for it to be taken down didn’t even realize that it was an interpretation of the myth of Narcissus,” Bernard said.

Quoted by TF1, the town hall said: “It’s not appropriate to leave these images up as the role of the town council is to maintain public order.”

Responding to the outrage, the advertising agency which was ordered to take down the posters JCDecaux said: “As we are on contract with the town hall we obeyed.”