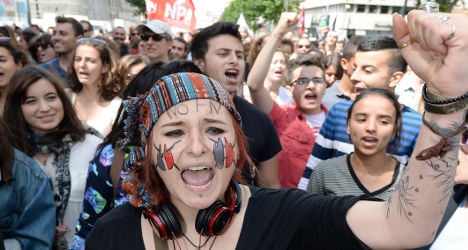 Thousands of students rallied across France Thursday to protest against the anti-immigration National Front party, whose historic success in EU Parliament elections they said threatened democracy.

Waving banners that read "No to the National Front", and "Wake up, France," demonstrators rallied in Lyon, in the east of the country, as well as in Paris, Toulouse, Rouen, Amiens, Nantes, Marseille and Bordeaux.

"We respect the result of the European elections, of democracy, but we do not accept the values of the National Front (FN)," said Silvio Philippe, one of the organisers of the Lyon rally. "French democracy is in danger."

The FN won a nationwide election for the first time on Sunday, topping mainstream political parties to clinch 24 of France's 74 seats in the new European parliament.

The result, which was echoed by similar gains for far-right parties in other countries such as the United Kingdom, sent shock waves through the political establishment.

After the vote, Le Pen said that voters had demanded "only one type of politics – a politics of the French, for the French and with the French," comments that sparked concern among the country's large immigrant population.

On Thursday — a national holiday in France — young people met in cities across the country to protest against the party.

One organiser said the rallies had been organised after a call to action by a secondary school student in the multi-cultural southern port city of Marseille.

In Paris, thousands of students met at the Bastille shouting anti-right wing slogans. Police said the crowds topped 4,000, although organisers said it was double that.

A large group of students rallied outside the European Parliament in Strasbourg, some carrying banners reading "We will not let fascism happen".

AFP reporters estimated the crowd at 2,000-strong, the police put the number at 800.

In Lyon, between 700 and a thousand students and school children met to protest against the party, according to police and organisers, some carrying posters that read "Lyon, capital of the resistance".

"We are all the children of immigrants," shouted demonstrators as they marched in Toulouse, where police said 800 young people had gathered. Posters being carried by the young people taking part said they are "fed up of the FN".

Organisers said there had been 2,000 at the rally.

"It is a lot for a protest organised in three days, purely on social media," the leader of one student union said.

The rallies were organised by student unions as well as Socialist, Communist and Green youth groups.

"It's the first time I have been to an anti-FN march," Tom, one 18-year old at the rally in Toulouse said, adding that he "regretted" not going to vote last Sunday.