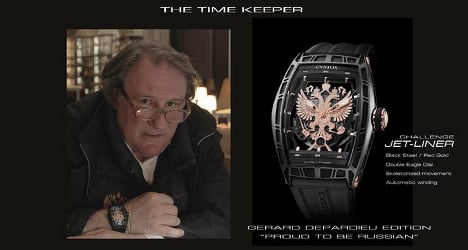 Veteran actor Gerard Depardieu who fled his native France in protest over a new wealth tax is now paying a rate of only six percent in his newly adopted country of Russia, the Izvestia daily reported Friday.

Russian President Vladimir Putin granted Depardieu a Russian passport in 2013 after he left France in protest at having to pay a 75-percent tax rate.

The 65-year-old actor filed his tax return on time in the remote Mordovia region where he has registered as a self-employed businessman, the deputy chief of the region's tax service, Sergei Shalyayev, told Izvestia, refusing to divulge the amount.

As a self-employed entrepreneur, Depardieu will pay a tax rate of six percent, Izvestia reported, citing his producer Arnaud Frilley. Most Russians pay a flat tax rate of 13 percent.

The six-percent rate is for entrepreneurs with an annual income of less than 60 million rubles ($1.73 million), Izvestia reported, citing a tax consultant.

A year ago, Depardieu registered as a resident of the town of Saransk, the capital of the region known principally for its many prison camps. He announced plans to open a restaurant and an arts centre in the town.

So far the actor has not put the plans into action and has not visited since last May, the media and information minister of the region, Valery Maresyev, told Izvestia.

"There were plans and they haven't been dropped. Gerard Depardieu will return to them when he finishes other projects," Maresyev said.

Depardieu has appeared in a Russian sitcom and in adverts for a Russian bank. He has also starred alongside Britain's Elizabeth Hurley in a film partly shot in Chechnya, "Viktor", which is set for release in Russia.