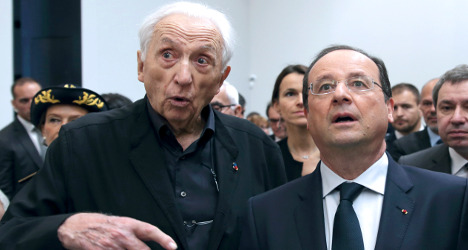 What was intended to be a grand inauguration of a new museum with the French President François Hollande in attendance, turned instead into a rowdy morning of protest in south western France on Friday.

Around 8:30am riot police police tussled with a mixture of angry artists, farmers and victims of the poor economy who gathered to protest in Rodez, where Hollande had come to open the brand new museum honoring painter Pierre Soulages. Police used tear gas to push back the agitated crowd, French daily Le Parisien reported.

As the police struggled with demonstrators, one of the president’s agricultural advisers, Philippe Vinçon, was in a meeting with members of farmers’ group Confederation Paysanne. But it wasn't an ordinary meeting between unhappy voters and the government.

Around 11am the group announced it had “detained” Vinçon and would hold him until the release of five of their camarades, who were being held by police on suspicion of vandalizing an industrial agriculture farm called “Mille vaches” (Thousand cows) in the Somme department of northern France.

A tweet from the activists carries a photo of Vinçon and reads: "The agriculture adviser questioned during his detention by the confederation treasurer and the spokesman."

“Things are calm for the moment. There’s been no physical altercation, but we have told him he can’t leave,” a unnamed confederation member told reporters. “They are in a room locked from the inside."

The farmers claimed victory around 2pm, releasing Vinçon once they’d received word the confederation’s five activists were due to be set free as well. The detention of the adviser mirrors the French union tactic of boss-napping, which was recently used in the struggle over the closure of tyre factory.

“We decided to free Mr. Vinçon because the court in Amiens is in the process of freeing our camarades,” member of the confederation’s national committee Christian Roqueirol told AFP.

Roqueirol added Hollande’s advisor had “understood Mille vaches and industrial agriculture aren’t the only things in France worth supporting.”

The incident is just the latest bad day for Hollande, who has the unfortunate title of the most unpopular modern French president ever. On Sunday far-right, anti-immigration party National Front won one in four votes in the European Parliament elections, which many voters said was a rebuke of the government's inability to fix the economy.

Then came word that France's record unemployment had climbed again in April and finally the results of a new opinion poll showed only three percent of French voters would choose him if a primary were held now for the 2017 presidential election.

He’s also seen more of his laws, 13 in total, invalidated by the country’s top constitutional authority than his two predecessors. Prior to that was the outing of his affair with a French actress by a tabloid magazine. It was an unusual scandal in France as politicians here generally are able to keep their private lives separate from their work.