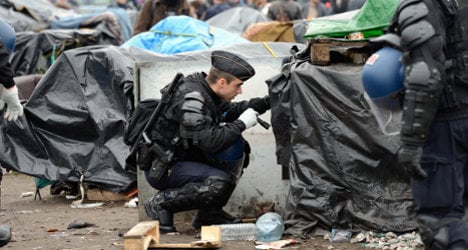 As French riot police worked to tear down a series of improvised migrant camps in Calais that were home to hundreds of people, many working in France’s aid organisations were shaking their heads in incomprehension and disgust.

Over the past decade authorities have chosen to deal with the migrants in Calais, most of whom use the port as a launching pad to get to the UK, by allowing the camps to grow in size and then forcibly clearing them and razing them to the ground.

Following at least one of these operations migrants were arrested and some deported, but in the latest high-profile dismantling of camps police have said they have no plans to detain anyone as long there is no “rebellion.” Instead they will be allowed to remain in the area, only without the makeshift homes.

Three humanitarian groups told The Local the cycle of delay and violence in dealing with the camps must stop. Instead it’s time to craft treat people humanely in the short term and craft a long term plan for dealing with the migrants.

'We cannot stop people who have nothing to lose'

“We have to take into account the reality of the situation and this zone is a part of a circuit for people seeking asylum in Britain. It’s not going to stop tomorrow,” said Jean-Claude Mas, secretary general of immigration support group La Cimade. “Instead of discouraging people who have nothing to lose, and who are willing to do anything to make the crossing at Calais, why not get organized?”

Since January at least seven migrants have died trying to smuggle themselves across the English Channel. Most recently a Sudanese teenager was crushed to death under a British tour bus he clung to in a desperate attempt to make it to the UK.

The danger migrants face in making the crossing is preceded by the miserable conditions they face in the camps. They are composed of tents and improvised structures and there's a lack of clean water and sanitation facilities. A recent outbreak of skin infection scabies was the official reason for the camp evictions on Wednesday.

“We know that people will take all manner of risks and there will be more victims during the immigration process, but we can at least ensure the minimum standards for shelter and hygiene that you would find in a refugee camp, access to water and sanitation facilities,” Dr. Jean-François Corty, director for domestic programs at Doctors of the World told The Local. “This would allow us the time to find solutions for the mid and long term.”

Having the kind of minimum conditions you’d find in the most rustic of campgrounds would not likely lead to a surge in migrants toward Calais, as authorities fear, said La Cimade's Jean-Claude Mas.

“It’s not because we provide the people already here with some basic support that thousands more will come,” he said. “The people who can get here, will come no matter what.”

Sadly, at least part of what is driving migrants toward Calais appears to be misinformation. While some may already speak English or have a cousin or friend in Britain, many are propelled by a belief their harrowing risks will be rewarded by a Britain deemed more generous to refugees and asylum seekers.

'Life is not easier in the UK than elsewhere'

“There is a myth about the UK, that the conditions there are better for asylum seekers and also that the process of family reunification is faster. Because their families are in danger they are trying to get started quickly as possible so they can bring over their wives and children,” Vincent De Coninck, a departmental representative at Secours Catholique told The Local. “The myths are untrue. We’ve heard back from people who are there and they are working illegally, they are prisoners of the system, and life is not any easier in Britain than elsewhere.”

In addition to short term needs like emergency housing, access to water and sanitation facilities for migrants, authorities will need to find long term solutions. Because if anything the conflicts in African countries like Mali and the war in Syria will continue to drive people north. The number of migrants caught so far this year at Calais has ballooned to 3,000 compared to 300 for the same period in 2013 – a tenfold increase.

“In the long term the authorities need to entirely rethink how they deal with refugees, allowing people to choose where they want to ask for asylum and also develop a Franco-British agreement about border security,” said De Coninck.

Yet as Corty from Doctors of the World points out, apart from delayed decisions and then forced expulsions, the French government doesn’t real have a policy on how to deal with this type of immigration. He said the events in Calais serve as a window into the country’s official logic.

“It’s symbolic of the immigration policy of  France, or even in Europe, in any case in terms of all its failures and inconsistencies. There is no proposal for how to handle this on the middle or long term,” said Corty. “It’s a situation that is left to rot and degenerate and then which is confronted with force, to show we know how to be tough with people who are in a precarious situation.”