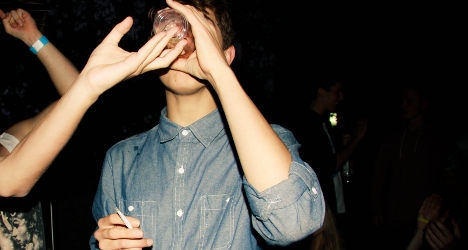 A group of students at the elite Hautes Etudes Commericales (HEC) may have taken a page this week from their American counterparts who have a penchant for drunken mayhem.

Following a genteel gathering on Tuesday to mark the end of the year, HEC students kept on drinking at the campus in the Paris suburb of Jouy-en-Josas and things got a little out of control.

“The night started with a drink, then some students continued at an “after party”. They started throwing furniture out the windows and then everybody began doing it,” an unnamed student told French daily Le Parisien. “The fire alarms were ringing in half the buildings on campus. It was bad enough that the police came, which they never do.”

The students also tagged and doused walls with beer and sprayed fire extinguishers in campus hallways of the prestigious school founded in 1881. It is one of France’s “Grandes Écoles” a class of higher learning institutions that have rigorous entrance requirements and regularly churn out the country’s ruling elites.

However HEC chiefs played down the seriousness of the college mayhem.

It was not a riot, HEC Secretary General Olivier Moreau told Le Parisien.

“Campus security quickly called the local police. We are in the process of establishing the number of participants, but all the involved students will be sent before a disciplinary board,” he added.

This is not the first time French students’ boozy behaviour has made the news as young French people imitate the binge drinking habits of their Anglo cousins.

In November last year The Local reported how a court in Nanterre, near Paris, found a students’ union guilty of manslaughter for allowing hard alcohol to be served at a student party in 2005, during which a 19-year-old man drank 15 shots in half an hour, before dying of an alcohol-induced coma.

The tragedy brought to light what had become a rampant culture of heavy drinking on the campuses of French universities, in particular the most elite among them – the “Grandes Ecoles.”

“The exceptional nature of this drama [the death of Thomas] shouldn’t hide a daily reality that is as normalized as it is disturbing,” wrote Henri Haget.

Ultimately, the episode helped contribute to the 2009 Bachelot Law on public health, which – among other measures – banned free "open bar" nights at pubs and clubs, targeted at university students.

While the events at the centre of Tuesday's ruling took place in 2005, binge drinking among France's youth more generally, doesn't seem to have abated since then.

Those revelations came just two weeks after a report which found that, among the general population, 134 people died in France every day, from alcohol-related illnesses and incidents.