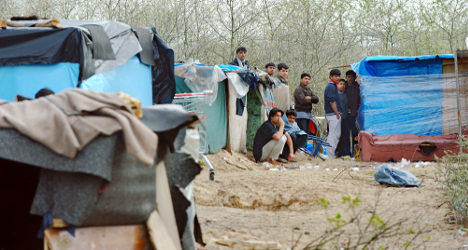 French riot police evicted migrants from a camp in Calais similar to the one shown here. Photo: Philippe Huguen/AFP

Just after 8am French riot police rolled into three migrant camps in Calais and began evicting the few who remained asleep under tents and tarps. By mid-afternoon some 550 people had been evicted.

The migrants were warned of the coming sweep and some had already left of their own accord from camps at the port of Calais that housed up to 650 people.

While there was no reports of violence some 300 migrants from countries such as Syria, Somalia and Afghanistan, were surrounded by riot police. Buses waited nearby to take them away for showers and to be treated for scabies, which has spread through the camps in recent weeks.

Although the outbreak of the skin infection scabies served as partial justification for the evictions charities and associations that  work with the migrants expressed their outrage over this latest sweep.

'The situation is tense'

"They are refusing to get on the buses because they know very well that once they leave their shelters will be destroyed," Secours Catholique departmental director Vincent De Coninck, who is at the scene, told The Local. "The situation is very tense and it is at somewhat of an impasse."

They migrants were eventually dispersed or taken for showers and treatment.

"This new use of brutality, accompanied by the destruction or loss of migrants' personal effects, is appalling. It is accompanied by no alternative solution to shelter some 600 people," Secours Catholique wrote in a statement. "If the urgency of addressing the health issue of scabies epidemic is real, it should not be a pretext for eviction."

Cecile Bossy, from the France-based Doctors of the World NGO, also told AFP at the scene that the evacuation was being conducted in a manner that is "anything but professional."

A journalist at the scene tweeted: "The migrants waiting to be evacuated. Authorities confirm they are to have showers and be treated for scabies."

The Pas-de-Calais administrative chief Denis Robin, announced last week the coming dismantlement by saying, “It is out of the question that we encourage the setting up of a jungle.”

He defended the sweep: "It's a public health issue. All the studies indicated that there was a scabies epidemic. These camps are very big and they are located right in the heart of Calais." Robin also said the camps had grown to the point that they posed a security threat for local residents and insisted "There would be no arrests except in the case of rebellion."

Migrants have used Calais for decades as a staging area to reach Britain, which some see as having a generous and more welcoming policy for political refugees.

The trend has resulted in political battles between the UK and France and has also led to periodic police operations to bulldoze the camps.

Migrants are frequently killed in desperate attempts to smuggle themselves across the English Channel on lorries or buses. Earlier this week a Sudanese teenager died after being crushed under a British tour bus that he’d clung to in an effort to reach England.

Illegal camps of would-be channel-hoppers have sprung up in the Calais area since the French authorities closed down the infamous nearby Sangatte immigrant detention centre in 2002.

France's Manuel Valls, who was recently appointed prime minister, took a tougher line on immigration than most of his Socialist party during his high-profile stint as interior minister.

Here's a short video of riot police moving through the camp: