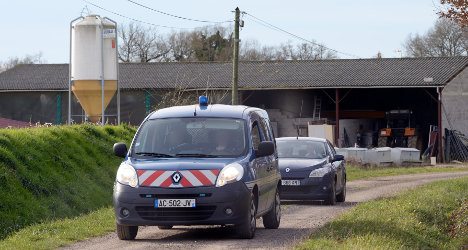 French farms have been hit by startling rise in theft. Sheep, produce and tractors have all been stolen. Photo: Mehdi Fedouach/AFP

They are just a few examples of the spate of pilfering from France's farms that has become something of an epidemic amid a 44 percent increase in agricultural theft France since 2007.

Since January alone farmers across the country have reported 3,000 thefts, which puts thieves on pace to beat the total of 10,600 crimes in 2013, French daily Le Croix reported. The number of thefts last year already represented a doubling in the rate of pilfering from farms over the past six years.

“We’re sure it's organized networks, with thefts targeting livestock as much as farm equipment, tractors and the like, sometimes chopped up and used outside France,” said Interior Minister Bernard Cazeneuve during a visit on Monday to anxious farmers in Bresse, in south eastern France.

Crooks target France’s farms which produce award winning, world famous wines and cheese for the same reasons they yield such good products. The farms are remote and are spread across large expanses of countryside in often sparsely populated places.

"This problem has been increasing for many years," André Bernard, president of a southern France Farm Bureau, told The Local on Wednesday. "Tonnes of produce from garlic to strawberries are being stolen and then there's the fuel. The farmers can't put up with it anymore.

"Perhaps we need more police officers in rural France, but we understand they can't station gendarmes everywhere where vegetables are being grown," he said.

Farmers are also easy targets. Lulled into a false sense of security by their rural lifestyle and a lack of people, farmers tend to leave the keys in their tractors and don’t always lock their doors. The idea of spending thousands of euros on an alarm system strikes farmers as impractical.

“It’s difficult to convince farmers to spend €5,000-10,000 on investments that don’t produce anything,” Michel Joux, president of the Ain Department farmer’s union Fédération Départementale du Syndicat des Exploitants Agricoles. “Until recently we weren’t used to this culture of security, but due to the rise in crime we are starting to worry.”

Since September 2013 the government has been working with local and regional leaders to fight against the rising levels of theft. More money and resources have also flowed to police and prosecutors investigating the crimes.

Police have taken to teaching farmers how to better protect themselves and have started a text message alert system that spreads the word about crimes as they happen.

However one source in the farming industry told The Local that the main problem facing farmers is the demands from France's mega supermarkets, which continue to pay low prices for produce.

"We have been talking about theft for two or three days, but in that same time there's been more damage to farmers livelihoods caused by the big supermarkets," the source said.

But, France’s farmers aren’t the only ones facing a worsening threat of theft. Statics release by the Ministry of Interior earlier this year revealed burglaries were spiking in the country, with holiday homes being targeted in particular.

Authorities have pinned some of the blame on the increase in crime on gangs from Eastern Europe and the Balkans.