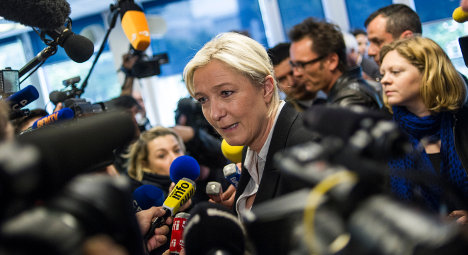 Germany's finance minister on Tuesday described France's far-right National Front (FN), which came out on top in France's weekend vote for a new European Parliament, as a "fascist" party.

Wolfgang Schaeuble told a forum on Europe that the outcome in Europe's second biggest economy was a vote "not for a right-wing party but for a fascist party".

The result is a reality check "for everyone in Europe, not only for our friends in France", Schaeuble, a veteran and strongly pro-EU member of Chancellor Angela Merkel's conservatives, added.

"My conviction is we have to make Europe better, not become eurosceptic," he warned.

The term 'fascist' will not go down well witrh Le Pen herself who only recently fought a court battle in France to try to prevent opponents from using the term to describe her party.

Unfortunately for Le Pen the court ruled that left wing firebrand Jean-Luc Melenchon was within his rights to label his bitter a rival a fascist.

Speaking after the verdict his lawyer said: “The whole FN policy of trying to silence journalists and political opponents… has failed. Madame Le Pen has today been condemned to put up with being called a fascist.”

The German minister's word came on the same day it emerged that French magazine Le Point is set to carry revelations on Wednesday from the National Front’s chief of staff Philippe Martel, who talks about investigating the private lives of journalists.

In an interview with Le Point Martel launched into a diatribe against “all those institutional journalists”.

“We’ll walk all over you. The French hate you. Our media plan is to attack you to death. The press is against us, why should we continue to work with it,” he said.

Martel also talked about a system at the National Front where they collect data about journalists’ private lives, ranging from the “studies they are doing to the apartments where they live”.

He then refers to a famous case when Marine Le Pen clashed with a BFM TV journalist.

This is nothing, it’s only the beginning,” Martel said.

Following the National Front's shock win results in Sunday's European Elections, in which the anti-immigration party topped a nationwide vote for the first time ever in France, Le Pen is on the hunt for allies.

She needs 25 MEPs from seven different countries across the European Union to form a voting bloc.

Le Pen is set to meet with potential allies on Wednesday but she ruled out joining forces with Golden Dawn in Greece, which many consider a neo-Nazi party or the extreme right Hungarian and Bulgarian parties Jobbik and Ataka.

The National Front leader also said she did not intend to meet the neo-Nazi German MEP Udo Voigt.

"There are a whole group of movements that, in my opinion, are interested in taking part in a large political force whose aim would be to prevent any new move towards European federalism," she told a press conference on Tuesday morning.