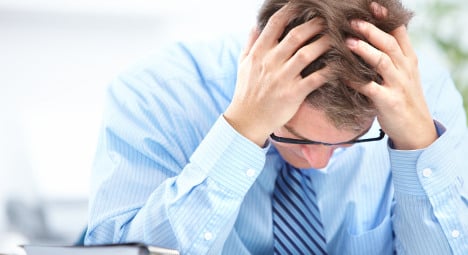 Despite France's labour laws, some of the strongest in the world, depression, long-term illness, professional burnout and even suicide are becoming increasingly common among service-sector workers.

Fabienne Godefroy became severely anorexic, losing 30 kilogrammes (66 pounds), and developed paranoia after two years of sexual and emotional harassment at her job in the south-western city of Toulouse.

She says constant hounding by her supervisor and his superior, lewd comments at meetings and obscene anonymous phone calls at home made her feel like a "hunted animal".

"To want to kill yourself because of work, yes it happens," she said.

The 41-year-old left her job with the Post Office several months ago and is now kept under close supervision by two psychologists.

Godefroy is not alone. The impact of stress at work was made brutally clear by a wave of suicides at French telecoms giant Orange between 2008 and 2009.

In that period, 35 employees took their lives, some of them in the workplace itself. Many of them left suicide notes blaming their "terror" of management and the shock of being shunted from one job to another with no regard for their skills.

One man jumped off a bridge after being transferred to a call centre. A 32-year-old woman threw herself out of an office window just days after a technician tried to commit suicide by stabbing himself in the stomach during a meeting when he learnt his job was being scrapped.

The former boss of France Telecom, Didier Lombard, and the company were charged with harassment in July 2012 – a first in France.

This year alone another ten employees of the company committed suicide by March, nearly as many as the whole of 2013, the Observatory for Stress and Forced Mobility, putting out a  "serious alert" about the company.

Observatory spokesman Pierre Morville blamed Orange's heavy redundancy plan – 30,000 employees out of a total workforce of 100,000, the largest job cuts from any French company in the past two decades – for creating an atmosphere of despair.

"With the advent of hyper competition and market constraints, employees have been destabilized," he said.

"American and Japanese managerial methods have been applied to workers in a somewhat brutal manner."  'Employees become tormentors' The European Agency for Health and Safety at Work says the problem is not unique to France.

According to a study of 31 European countries published last year, stress at work is seen as a common phenomenon by more than half of employees.

Job insecurity, too much work and harassment were cited as the most common causes for workplace depression.

"The physical suffering once linked to work has been transformed into a more intimate form of emotional suffering," said Denis Maillard from the Technologia advisory group, which specializes in analyzing risk in the workplace.

"Drudgery is now much more psychological than in the industrial world because of the demand for employees to engage differently in their work," he added.

Technologia, which has carried out a hundred studies of French companies in the past five years, found that workers at France's Post Office and unemployment agency Pole Emploi are most vulnerable to psychological problems because of demand for increased productivity.

For Jean-Claude Delgenes, head of Technologia, problems of bullying and psychological burnout reflect "an organization that forgets people and puts more and more emphasis on pressure and profitability."

Under these conditions, employees "swamped with work, will become tormentors to achieve their goals," he said.

Earlier this year The Local reported how millions of French workers were said to be close to burnout due to the pressures of overtime.

“France’s appearance from the outside can be a bit simplified,” Technologia's head Jean-Claude Delgenes told The Local at the time. “There is a lot of overtime. Most workers don’t adhere strictly to the 35-hour work week.”

“We have poor self-control when it comes to new technology,” Delgenes said. “Work spills over into people’s private lives. The difference between work and social life used to be clearly distinct."