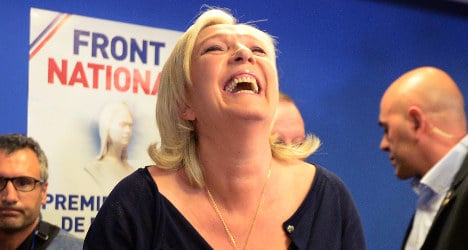 The National Front's Marine Le Pen, clearly enjoying her moment in the limelight. Where does she go from here? Photo: Pierre Andrieu/AFP

For the first time in its history on Sunday France’s National Front Party topped the vote in a nationwide election. We take a look at some key questions it raises for France and Europe.

Is this THE "breakthrough" for the National Front?

We’ve talked about breakthroughs in the past for the National Front, not least after the first round of the 2002 presidential election when Jean-Marie Le Pen beat the Socialist Party candidate Lionel Jospin to the run-off against Jacques Chirac. But the party failed to push on after that success. Will victory in the 2014 European Elections be any different?

“There have been ups and downs in the score of the National Front in elections over recent years, but this time things are different because of the political situation in France, with a deeply unpopular Socialist government in charge,” French and European Politics professor Philippe Marlière tells The Local.

“This raises the possibility that in the next presidential election in 2017 we could see a repeat of 2002. I am not saying there is enough support for Marine Le Pen to win that election, but all the conditions are there for her to be in the run-off.

Some critics have pointed to the fact that there were no street protests on Monday, following the European Elections, unlike in 2002 when thousands of young people took to the streets. A sign, according to Luc Bonner writing in Le Monde, that National Front has become accepted or "de-demonised" in the eyes of many French people.

“It appears the FN vote is more a vote of support and not just a protest vote. The argument that the FN has no concrete propositions towards Europe, was ignored,” Camus told L’Express.

Has France’s image been tarnished abroad?

“France is a country where the leading party is extreme right. It's extremely serious,” said the Socialist Party’s Julien Dray, trying to sum up the gravity of the result.

The general consensus appears to be that with the National Front topping the poll, the image of France globally and certainly in Europe has been stained.

“I think it has tarnished the image of France, but it’s not the first time, because we had the same in 2002. In reality only a tiny part of the National Front's electorate is actually far-right. For the others it’s just a vote of despair. They are working people and are simply fed up," says UCL's Marlière.

But for Marlière the reason why it will look worse than say, the support in the UK for the eurosceptic UKIP party is the history of the FN. “It will damage France, because no matter how amicable the National Front party tries to appear, ideologically it remains a party of the extreme right if you study its policies.

“The National Front party was founded in 1972 by former Nazi collaborators, Vichy Nostalgics and the veterans of the Algerian war," he said. There are also the numerous convictions for hate speech for the founder and honorary president Jean-Marie Le Pen, who only last week suggested Europe's "immigration problem" would be solved in three days by the Ebola virus.

"The country’s image is stained, but how long will that last for? Only time will tell,” Cann told Le Figaro. “The risk is the stigmatization of France abroad. Remember Austria 15 years ago? All of Europe, including France pointed the finger at the country for giving 26.9 percent of the vote to a far-right party. Today we have been caught by the same phenomenon." What does this mean for France’s mainstream political parties?

Although all the talk was of another disastrous night for France’s Socialist Party and François Hollande, in reality the results were also embarrassing for the centre-right UMP party.

“It’s a rejection of both the mainstream parties. The centre-right UMP should have done a lot better but all the discord plays into the hands of the National Front,” says Marlière.

“The main issue for voters in France was the economy, jobs, unemployment and growth and the National Front managed to come across as a plausible alternative. It offered support and help to people who felt they had been let down," he said.

Added to that was the fact the UMP has been involved in infighting and and its leader Jean-François Copé mired in scandal and the Socialist Party appears to be disabled because of the unpopularity of François Hollande and his inability to turn the economy around or convince voters he will ever do so.

Big wigs in both main parties called for major reforms to their groups on Monday, in the hope they don't suffer the ignominy of losing out the FN ever again.

The result was described as putting the Socialists on the verge of “a historic knock-out". Hollande talked about having to learn lessons after the elections. He better get studying fast. For the UMP there is always the prospect of Nicolas Sarkozy returning, although that may be popular with voters it might simply lead to further infighting that has weakened his party.

What does Le Pen’s victory mean for Europe?

Marlière belives it’s not all bad news for the European project despite a massive jump in the number of parliamentary seats for eurosceptics.

“There’ll now be around 130 eurosceptic MEPs but there are 751 MEPs in parliament so you just need to do the maths,” says Marlière. “And will all these anti-Europe parties get along with each other? UKIP has already said it doesn’t want to work with the National Front and Marine Le Pen has said Golden Dawn in Greece is too extremist for them to ally themselves with.”

Le Pen needs 25 MEPs from seven different countries to form a voting bloc in parliament that could prove lucrative in terms of opening up funding.

Camus points out that while Le Pen has enough MEPs, given that the National Front should end up with around 25 seats, there's no guarantee it will get enough allies from six different countries.

“It’s not set in stone at all. But given her success in France, Marine Le Pen has increased in stature and visibility across the whole of Europe,” Camus said.