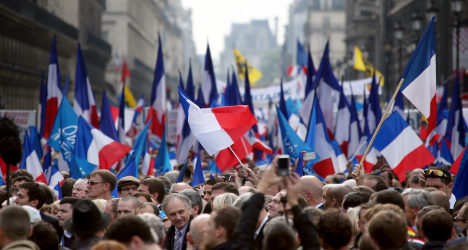 Anger over the economy and at main parties drove voters to the National Front, Parisians said. Photo: Kenzo Tribouillard/AFP

There were no anti-National Front demonstrations on Monday morning in the heart of Paris, the day after the anti-EU, anti-immigrant party took first place in the European Parliament elections in France.

In fact voters shrugged their shoulders in typical Gallic fashion and told The Local they were not surprised the party had won 25 percent of the vote, beating the centre-right UMP and the Socialists by wide margins.

For voters the record unemployment and the inability of mainstream parties to do anything about it have pushed people to lash out at their political leaders.

“It was a totally expected result. French people are fed up with the economy, with struggling to survive and with the politicians,” Rialti Mouair, 29, a waiter, told The Local. “It's been how many years and these politicians can’t get their people out of this crisis. We are fed up. It's not racist.”

Another voter, 38-year-old businessman François, who declined to give his last name, said people saw the vote as not having real political consequences.

“This vote should not be seen as representative of how French people think about immigrants. People are angry, they voted for the FN, but it’s not representative,” he said. “For most people this was like an opinion poll.”

While the vote was undoubtedly influenced by the despair in France, it also demonstrated an increasing eurosceptic backlash among the French. While once most were true believers in the European project, their support has been falling faster than in other nations.

“We’re tired, we’re fed up,” said Dominique Beutain, 60. “Apart from money, Europe doesn’t ask us anything. Aside from paying we have no involvement in Europe. We get nothing.”

Few voters told The Local the huge victory for the National Front left them worried or scared. It’s markedly different from the situation on the ground in 2002, when then National Front head Jean-Marie Le Pen made it to the run-off in the president elections.

“People are much more interested in presidential elections. People voted for the National Front because it sends a message,” said Jean Vila, 28, who works in a bank. “I hope the main parties heard this message. They have to change.”

The victory did, however, leave some French voters worried about the future of their country and the European Union.

“It’s a catastrophe, this election. It’s a tragedy for democracy,” said Clement, 37, who produces documentary films and declined to give his full name. “It’s not the National Front, it’s the radicalization of French politics that they have engendered that has me concerned. Everyone is getting more extreme because they have made it OK.”

Clement said this change has left older relatives in his family worrying about an end of the European Union and a return to disunited nations and the wars they waged against one another.

However the general feeling was less dire. Many voters shared the feelings of Leilie Dabbarh, a 45-year-old nanny, who doesn’t think the vote means the Union is about to collapse or that the National Front is poised to grab the presidency, or at least she hopes it doesn’t.

“I think that the French don’t believe in the ideas of the National Front, or at least not most of them,” she said. “It was a vote intended to punish the main parties. People are fed up.”

But it might be more than that. Most voters said they don’t support National Front or its leader Marine Le Pen, but some agree with some of her ideas.

“Marine Le Pen is right in a fundamental sense when she’s talking about the French needing to take care of themselves first,” said Mouair, the waiter. “It’s not racist, it’s just not right. We’re trying to take care of immigrants, but we don’t have enough work for our own people. We need to help ourselves first.”