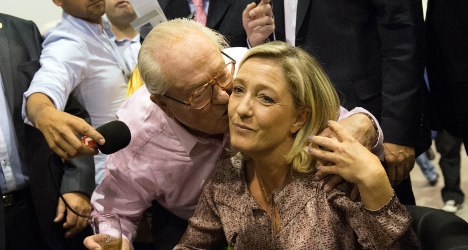 The European Election results prove that Marine Le Pen has successfully changed the image of her party. Photo: Bertrand Langlois/AFP

As a schoolgirl, Marine Le Pen was teased that she must be a fascist because her father was one.

It is a charge the former lawyer who heads France's far-right National Front (FN) has worked hard to shake off in the political playground.

And on the evidence of Sunday's European election results, the TV-friendly blonde has succeeded.

But it seems French voters are increasingly persuaded that Marine Le Pen, 45, is a different political animal to her father: either that or they are so thoroughly fed up with the established political parties that they are willing to offer her the benefit of the doubt.

With 80 percent of the ballots counted, official results put Le Pen's party on course to comfortably top the polls with 25 percent of votes cast.

Around a third of France's 74 seats in the new European Parliament will be occupied by deputies who want the country to quit the euro, reinstate national border controls and repatriate the bulk of Brussels' powers to national parliaments.

It is a situation that would have seemed conceivable barely six years ago, when the FN was mired in internal squabbling and financial crisis. Having flourished in the nineties and the first half of the noughties, the party then appeared destined for the margins of French politics.

One of the consequences of that period of internecine conflict was that Marine Le Pen's two elder sisters, Yann and Marie-Caroline, fell by the wayside in the family contest to succeed their father at the helm of a party he had helped found in the early 1970s.

Having cut her teeth in the party's legal service, Marine took over the leadership in 2011 and immediately set about transforming the image of a party she is determined will be more than a protest force in French politics.

She polled just under 18 percent in the first round of the 2012 presidential election and her popularity — and profile — has steadily grown since.

Confident in front of the cameras and never afraid to take on her political adversaries head-to-head, Le Pen says her legal background has stood her in good stead. "I'm always pleading a case," she said recently.

A reputation for being an enthusiastic nightclubber has not harmed her image, although last week she insisted it was wide of the mark. "Contrary to the legend, I'm more of an early-to-bed girl," she said.

In its early days, the FN was a refuge for veterans of paramilitary operations against Algeria's independence movement, apologists for the wartime
Vichy regime's collaboration with Nazi Germany and some ultra-traditionalist Catholics.

It is not difficult to imagine what the latter category of activist would have made of Marine, who now lives with fellow FN activist Louis Aliot after two marriages ended in divorce, the first of them having produced three children.

As France's economy boomed in the seventies and eighties, the FN became a focal point for those opposed or unsettled by the mass importation of workers from the former colonies in Arab north Africa.

But since Le Pen junior took over that the FN has made strides towards shedding its image as a racially obsessed, single issue party.

Critics say nothing has really changed. Where her father would castigate the presence of foreigners in France, Marine Le Pen denounces "wild globalisation" — the message is the same, they argue.

And many have detected a coded racist message in Le Pen's campaigning on issues such as whether mosques should be allowed to organise prayers in adjacent streets or her announced that local councils run by the FN will, in the name of secularism, refuse to provide kosher or halal food to schoolchildren.

On the other hand, under her leadership FN officials who step out of line on the race issue, tend to find themselves quickly expelled and the party has even fielded a handful of ethnic minority candidates in local elections.

She has also worked to broaden the party's appeal by ensuring it is represented in the full range of debates.

Unemployment, living costs and crime — all of which can be easily linked to either Europe or immigration — remain the main focus, but the FN has also been making its voice heard on subjects such as education in recent years.