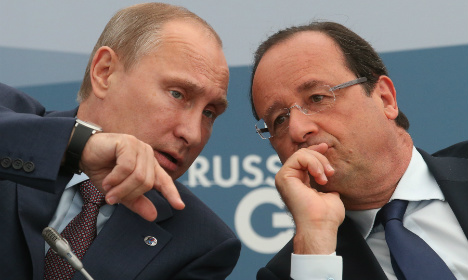 "From what I understand the president of France wants such a separate meeting to discuss issues related to bilateral ties and the international questions of the day," Putin told foreign news agency journalists at a key economic forum in Saint Petersburg.

"Of course I am open to any such discussions. If the French president's agenda allows it, I would be happy to meet with him to talk about these issues of mutual interest," Putin said when asked by AFP about the possibility of talks.

Putin will be attending the ceremonies on June 6th to commemorate the Normandy landings that marked the beginning of the liberation of continental Europe from the Nazis in World War II.

His trip comes amid the worse standoff in the West's relations with Russia since the end of the Cold War, over Moscow's annexation of Crimea and its alleged backing of pro-Russian rebels who have declared independence in eastern Ukraine.

The White House said earlier this month that US President Barack Obama had no plans to meet one-on-one with Putin when they both attend the anniversary events.