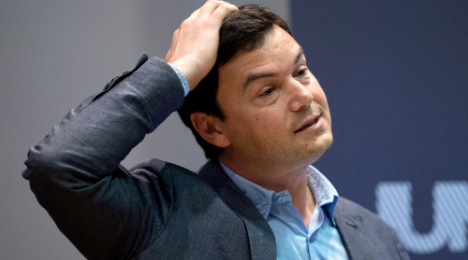 The FT claimed Friday there was little evidence in the 43-year-old's original sources to underpin his argument in "Capital in the Twenty-First Century" that an increasing share of total wealth is in the hands of the richest.

But Piketty said: "The FT is being ridiculous because all of its contemporaries recognise that the biggest fortunes have grown faster.

"The data that we have on these fortunes is imperfect but data for other things such as tax declarations on estates is more reliable."

He worked "completely transparently" and posted all his data online, he added.

The FT said in its report that once it had "cleaned up and simplified the data, the European numbers do not show any tendency towards rising wealth inequality after 1970".

But Piketty told AFP in an interview: "Where the Financial Times is being dishonest is to suggest that this changes things in the conclusions I make, when in fact it changes nothing.

The English-language version of Piketty's book topped the Amazon bestseller list in the United States and has sparked a political debate about the gap between rich and poor.

Critics have tried to deride his work by labelling him a neo-Marxist, but it gained him an audience at the White House last month with top economic advisers to US President Barack Obama.

He rejects the argument that economic growth in the capitalist system benefits everyone, and advocates a punitive global tax on wealth to address the issue.