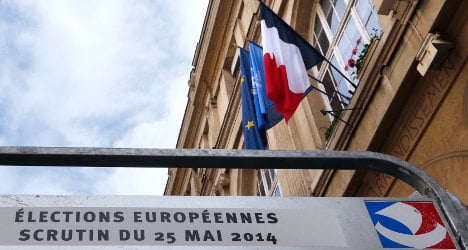 Do British expats in France care about the European elections? You bet they do. Photo: François Guillot/AFP

There’s more at stake in this year's 2014 EU Parliamentary elections than ever before, it seems. Some believe the vote could be a turning point in the future of the European project.

Marine Le Pen’s far-right National Front party is poised to win a double-digit percentage of France’s 74 seats in the 751-member Parliament. The Parliament has more power than ever before, especially in terms of spending its €960 billion, six-year budget, and it will have a say on who becomes the next President of the European Commission.

And after the near constant years of bad news since the worldwide economic crisis struck, European voters will have their first chance to weigh in on how Brussels has dealt with the crisis. But for longtime British expats in France the stakes are also uniquely personal.

It’s the only national and international election some expats are allowed to vote in.

"I’ll be voting. Apart from the local elections we had a month ago, it's the only time that I can vote," said Paris-based Christopher Chantrey, chairman of the British Community Committee in France. "I'm British, I live outside the UK and I've done so for more than 15 years. Accordingly, the British government very unfairly denies me, and people like me, the right to vote [in parliamentary elections]."

Being disenfranchised back home has left this group of expats starving to participate in the democratic process. But also, by dint of their expat existence they are experiencing first hand the benefits of a united Europe.

They are free to live and work in France as long as they’d like without any special authorization from the government. Their pan-European life has left quite a few of them staunch supporters of the vision for a united continent.

“I do like to take the opportunity to let the French know what I think,” said Stephen Clarke, author of the global bestseller 'A Year in the Merde'. “Also, I’m very pro-European and obviously being a European expat you have to be pretty pro-EU because otherwise you’d get kicked out or have to queue up for hours for residence permits.”

Kim Laidlaw, editor of online city guide Unlock Paris, echoed those sentiments. Though she won’t be able to vote after failing to register in time.

“I have a stake in Europe as a European citizen, especially as an expat this is particularly relevant to my life,” she said. “I’m not just an English person or a Brit or an expat, I very much see myself as a European. I’ve got British roots, but I’ve spent a third of my life in France so a lot of me is quite French.”

But with the rise of far-right political parties across Europe many see dark political forces at work this election year. Recent polls have shown the National Front is on pace to tie with or beat the centre-right UMP party in the race to capture the most French seats in Strasbourg.

Author Stephen Clarke feels the same: “I’m an immigrant, so I don’t like it when people are anti-immigration. When people bring it up I say ‘Do you want me to leave?’”

He added, “There are so many dark forces, racist parties who use Europe as an excuse for talking about immigration, who hijack the whole European issue for things that it’s not really about.”

Aside from the threat posed by extremist parties fighting to gain more influence, some expats have traditional, long-running questions on their minds. Peter Hornby, who runs advice forum The Languedoc Page, told The Local why he’ll be voting.

@TheLocalFrance But is v.v. important to participate whichever party you vote for. Voter apathy lets the extreme in. @frasermatthew

@frasermatthew DH and I will be voting in the D-Sevres on Sunday. No vote, no stake. @TheLocalFrance

Bob Lewis, president of the Franco-British Chamber of Commerce believes voters have a moral responsibility to cast a ballot.

"It's important for us to be involved if we want to stay partners in the European organization and community. We have to share our feelings and vote for the right person," he said.

This fervor to vote and stay active runs counter the trend among French voters which is toward ever lower turnout. By some estimates France will fall below the 40.6 percent participation rate seen in the 2009 vote.

French voters, once the great Euro believers, are increasingly Eurosceptics. And some expats in the country have taken on that frame of mind.

“I’ve become as anti-European as most of the French. Europe was a fashionable idea in France about twenty-five years ago when I was a young student in Paris, mainly because the French believed they were at the centre of Europe,” said author and journalist Matthew Fraser.

“Today that is no longer the case. Germany is the main engine. And Europe has become grotesquely technocratic in the minds of many French.”

Some expats however won't be voting it seems, with the finger of blame pointed at the lack of information around who is standing and what they stand for.

"If the candidates had made themselves known and had made us aware of their policies then yes, there is a high chance I would vote. As it is, I have no idea who our candidates are let alone what they stand for! Pretty poor really," wrote one commenter on The Local France's Facebook page.