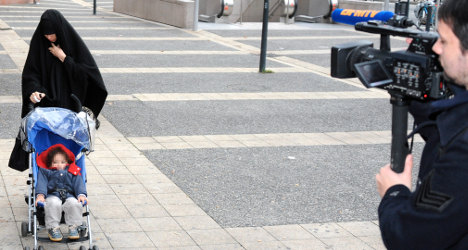 Officials believe the sister of terrorist Mohamed Merah may have fled to Syria. Photo: Pascal Pavani/AFP

Who is Souad Merah?

Described as a “potential terrorist”,  she is the 35-year-old sister of Mohamed Merah, who gunned down seven people in and around the south western city of Toulouse in 2012 before being killed in a shootout with police.

She has long been suspected of helping her 23-year-old brother, the self-proclaimed Al-Qaeda-inspired gunman, carry out the murders that included three Jewish children and a rabbi in front of their school in Toulouse. She has never been charged in connection with the attacks.

French authorities lost track of her after holding her in April for questioning in the ongoing investigation into who helped Mohamed Merah carry out the killings, which also included three French soldiers. Only Merah's older brother, Abelkader, and two other men have been charged so far in connection with his killing spree.

After days of media speculation, Interior Minister Bernard Cazeneuve admitted on Friday that she’s fled France and may have gone to Syria, where her Islamist husband is believed to be fighting jihad against Syrian dictator Bashar al Assad. However, authorities can’t say for sure where she is.

Domestic intelligence agents learned of her disappearance after her four children, aged nine months to 14 years old, failed to turn up at school after the Easter holidays. That tip-off from the school in Toulouse led to Paris anti-terror prosecutors opening an investigation on Thursday. What do authorities know so far?

Not much. On Thursday Police cordoned off the neighborhood where Souad Merah’s apartment is located during a search. The bomb squad was called in to check her second-floor unit for booby traps and explosives. There's been no word of what, if anything, they may have found.

How did she become linked her brother’s attacks?

Born in Algeria and brought to France at the age of three, Souad Merah slowly became a strict adherent of Islam. She turned to religion when her first husband got arrested for drug smuggling in Spain and in time became very religious, older brother Abdelghani Merah wrote in his tell-all book “My brother, the terrorist.”

According to the book she was “well aware” of her younger brother’s stockpile of weapons and plan to attack because the "Jews kill our brothers and sisters in Palestine." The book goes on to call her a “potential terrorist” who is capable of a “suicide attack”.

Has she publicly supported her brother?

A conversation secretly recorded by M6 TV as part of a special report, has her defending him: “I am proud of my brother, who defended himself well. I’m proud. He fought until the end.”

Her words prompted an investigation into whether she glorified terrorism, but no charges were ever filed. She later claimed in an interview that she’d been tricked and her words were taken out of context.

“He’s my brother, and he did what he did. I condemn his acts, but he’s still my brother,” she told i-Télé. “It’s not just because we are Mohamed’s relatives that we are necessarily all involved or guilty.”