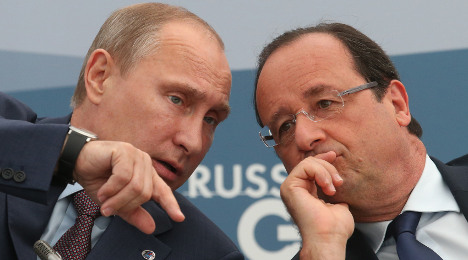 It appears the world of international finance and investment has the same feeling towards French President François Hollande as most of his own citizens do.

Hollande’s approval ratings have been plummeting at home for months and a poll by financial news site Bloomberg reveals Hollande is not much more popular abroad, at least among the world of finance.

In a poll where Bloomberg’s main clients were asked to name the global leader most likely to stimulate investment Hollande came in bottom of the pile, receiving just 11 percent of the votes.

Top of the table was Germany’s Angela Merkel, who polled 76 percent of the vote, followed by David Cameron on 60 percent. Shinzo Abe, of Japan came in third followed by XI Jinping of China and then Antonis Samaras of Greece.

The United States’ Barack Obama was in sixth and Russia’s Vladimir Putin in eighth.

Hollande's unpopularity among global investors can partly be explained by his willingness to raise taxes on top earners since being elected in 2012, including his landmark 75 percent levy on those earning over €1 million a year.

The survey is of course just a poll, but recent studies show that investors feelings towards France have gone cold in recent years and it has had some costly effects.

In January this year, a United Nations report revealed how foreign investors had deserted France in 2013.

said the country saw a 77 percent decline in direct foreign investment last year, while the global average was an 11 percent increase.

France's results were the worst in the European Union, according to the United Nations Conference on Trade Development report released on Tuesday.

The decline meant $5.7 billion (€4.2 billion) less invested in France as the country battles stubbornly high unemployment, which at 11.1 percent, is an historic level. Investment around the globe jumped by $1.46 billion (€1.1 billion) during the same time.

France is not alone in its troubles. Fifteen of 27 EU countries were also hit with a decline in investment in 2013, which was part of a global trend of cash flowing away from developed countries.