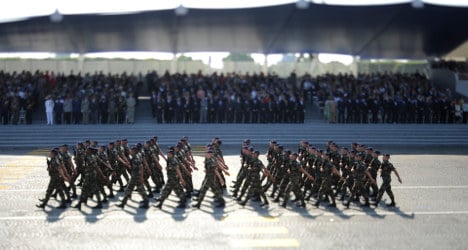 France is fighting over its defence budget. Photo: Fred Dufour/AFP

France's defence minister has warned that any further cuts in the military budget would badly hamper operations amid reports that the top brass would quit if there was further belt-tightening.

French President François Hollande will take decisions on the issue in the coming weeks, his entourage said on Friday, following Defence Minister Jean-Yves Le Drian's letter to him.

The warning comes at a time when France has sent troops to two of its former colonies in Africa, Mali and the Central African Republic, where there has been widespread fighting following coups.

If there are more cuts, "the army will become under-equipped and will not be able to undertake new operations," said Le Drian.

He also wrote that the forces were in a state of "near exasperation" over cuts already announced.

The French government plans to cut €50 billion ($70 billion) from state spending over the next three years, partly through freezing a range of welfare benefits and the pay of most public sector workers.

It also plans to scrap 34,000 defence jobs in six years and do away with some regiments.

The satirical weekly Le Canard enchaîné said the heads of the army, navy and air force met secretly on May 13th and agreed to resign if the military suffered more budget cuts.

They did not issue a statement but leaked their intentions to the press, the weekly said.