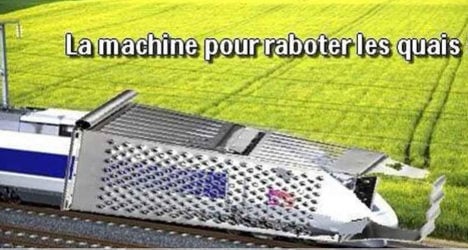 "The machine to plane down the platforms." One of the many jokes on Twitter at the expense of SNCF. Photo: Twitter

News that French rail chiefs will have to shell out tens of millions to alter 1,300 station platforms because its new fleet of trains are too wide continued to cause both outrage and hilarity on France on Thursday.

With Culliver ordering an immediate inquiry into how the wrong measurements could have been handed over to two companies making the trains, politicians continued to express their anger over the gaffe.

Main opposition leader Jean-François Copé from the centre-right UMP party called it a "Kafkaesque" situation and the head of France's ruling Socialist party was equally scathing.

To make matters worse members of three rail unions went on strike on Thursday to protest against the proposed rail reforms that are set to go before parliament in June. The industrial action was expected to cause only minor disruption around  the country.

"Fifty million euros is a lot of money and we are the laughing stock of the international press," she said.

Marine Le Pen said: "With the price of train tickets steadily rising over the years, this waste of public money is absolutely insufferable."

However the reaction to the scandal from many web users in France was slightly different, preferring to mock the engineers of French rail operators SNCF than slam them as the photo and the tweets below suggest.

"Is an engineer at SNCF well paid?" asks Wilf Bretagne.

"A bus driven by an engineer at SNCF," tweeted Quentin Boitel.

"SNCF fed up with all the criticism, that it deems unjust, the engineer goes back to lay out on his sofa," Tweeted Tom

Again at the expense of the "SNCF engineer" Zaakie tweeted: "We found the SNCF engineer, who wanted to pretend to be Father Christmas for his children."

As well as Twitter users making light of the gaffe, companies also capitalised on the publicity the error was receiving around the world.

Notably Durex. "Dear SNCF, with that, you won't haveto shave anything off," it said advertising a lubricant.

In terms of who was to blame for the blunder it appears both SNCF, which operates France's trains, and RFF, which is in charge of the rails, both played a part.

It was RFF who handed over the wrong measurements for France's station platforms to SNCF, whose engineers decided not to double check.

However in the end it is RFF who will pick up the €50 million bill for the blunder.

TRAIN TRAVEL
‘Something always goes wrong’: What I learned taking the train through Europe with two kids
Url copied to clipboard!