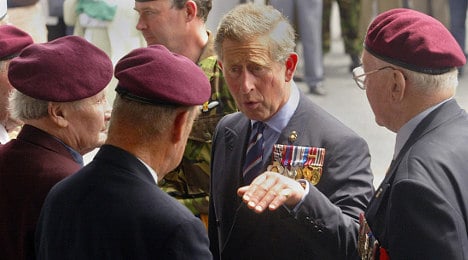 A French mayor took his plea for Prince Charles to visit his town to the man himself this week. Photo: Jim Watson/AFP

Olivier Paz, the mayor of Merville-Franceville on the Normandy coast of northern France, met with the heir to the British throne's aides at Clarence House for a cup of tea and a half-hour chat.

Charles, who is currently touring Canada, is visiting Normandy on June 5th and 6th but Merville is not – and never was, according to his office – on his schedule of visits.

Nevertheless, Merville's residents were under the impression he was coming and have been left deflated.

"The people of Merville are very upset. We had been preparing for the visit for weeks," Paz told The Local earlier this week.

"We thought he was going to come so our expectations were high and then to be let down at the last minute. There was so much enthusiasm, people had been preparing their British flags. That's why everyone is so upset.

"We have never had a visit from a member of the Royal Family and this may be the last chance as there may be no veterans left by the time the 75th anniversary comes around," Paz said.

However Paz said his meeting at Clarence House was a warm and had sowed the seeds for future visits.

"We have lost this little battle but there will be positive benefits for us," he told AFP

He said trying to get Charles to change his schedule had never been on the cards.

"It's our next objective," he said.

"I said it would really mean a lot to us if he could come when the veterans are still around, because in ten years' time it won't have the same significance."

He gave Charles's staff a letter signed by more than a thousand people expressing disappointment that he would not be visiting the village, which has 2,000 inhabitants.

The Merville Gun Battery coastal fortification was used as part of the Nazi German occupation's Atlantic Wall, designed to prevent against an Allied invasion.

British paratroopers captured the position on June 6th, 1944 as part of the Normandy landings.

Paz claimed Merville was included in a "pre-programme" put together by the organizers of June 5th events, but the final programme was shortened due to Charles' official engagements limiting his time.

Charles's aides made the effort to speak in French and were "very warm and very concerned that there should be no misunderstanding", Paz said.

They relayed a message from the prince saying he was sorry that he could not visit, he added.

A Clarence House spokeswoman said the meeting was cordial, without commenting on the content of the talks.

She reaffirmed that a visit to Merville had "never been part of the official programme" for Charles' engagements on June 5th and 6th, and that Paz was among ten or so mayors invited to a lunch hosted by The Parachute Regiment.