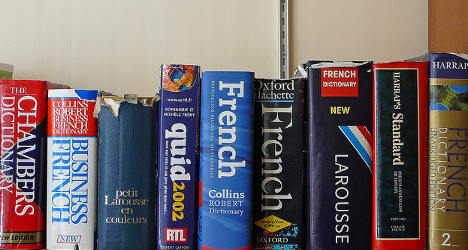 More Anglo words entered the French dictionary this week, including "Hashtag", which had previously been barred by the language police. Photo: Tim Green/Flickr

Here's some good news for Anglos struggling with the language of Moliere. There are a whole new crop of English words you are now officially permitted to use in French.

France’s two main dictionaries, Robert and Larousse, are set to release their 2015 editions and have leaked a few of the new words that made the cut. Not surprisingly high technology words are leading the pack.

“Selfie”, “hashtag”, which was previously replaced in France, “cyberattaque”, MOOC (Massive Open Online Course) and “troll”, when used in the sense of a deliberately offensive online commentor, will all be in the Petit Robert de la Langue Francaise when it goes on sale on May 28 as will “burger” and “hipster”, both of which seem long over due.

“It’s always a very difficult choice,” renowned linguist Alain Rey, the chief editorial advisor at Le Robert, told Le Parisien. “We shouldn’t say “Anglicisms” or “Americanisms”, but “Californianisms” because most of these words come from West Coast of the United States, in particular Silicon Valley.”

(Here's a list of some of the new words) However, the new Franglais words in Le Robert weren’t all born in Facebook’s backyard.  “Veganes” (yes vegans) “procrastiner”, “prequel” and “cyborg” are also included in the new dictionary. Some words that were likely stolen from other languages by English speakers also caught the eye of the people at Le Robert.

Among them are exercise crazes “Zumba” and “Pilates”, as well as the Starbucks stalwart, “barista”.

The folks over at Larousse have also added a few Anglicisms as well, including “Made in France” the phrase popularized by the country’s very patriotic Economy Minister Arnaud Montebourg.

Because these words came into use on the street long before they made it into the dictionary, they provide examples of the worries among France’s linguistic elites. Since the mid-1990s the Academie Française has had the role of being the firewall against the Anglicization of French.

Most famously “courriel” was put forward instead of “email” and the Académie's friends at the Ministry of Culture binned “Hashtag” and replaxced it with “mot diese” and so on.

But not all of these words take root among the general public and, as the new dictionary entries show, new words are coming in all the time.

But perhaps France's much-mocked protectionist stance towards its language is overplayed.

On Thursday British poet Professor Michael Edwards, 73, will inducted among the 40 so-called “immortals” at the Académie Française . His official acceptance means he’s the first Briton ever to join the elite group of 'Immortals”, as they are known, tasked with protecting the French language.

Edwards, a respected poet in both French and English, was voted in a year after narrowly missing out on the post by just two votes in 2012. He also lost out on the role in 2008 after not receiving enough votes.

After Edwards nomination was accepted last year, fellow immortal Marc Fumaroli told The Local that the appointment of Edwards was good news for the Académie and good news for France.

“Michael Edwards is a francophone of the first order. He has a lot of talent and is very well respected here in France, and well liked,” Fumaroli said. “It's not the first time we have appointed a foreigner who has chosen to adopt the French language.

SEE ALSO: English words that have been reinvented by the French