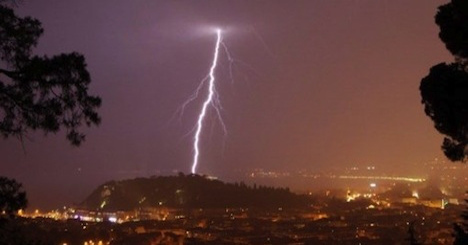 Storms set to hit a swathe of France on Wednesday. Photo: Valery Hache/AFP

A swathe of France stretching from Dordogne in the south to Pas-de-Calais in the north was on alert for storms on Wednesday.

Météo France issued the orange alerts – the second highest ranking of weather warning – as the storms spread across the country.

Storms currently hitting the Gironde, western France, as well as Poitou-Charente, will intensify throughout the afternoon as they pass through several departments placed on alert, Météo France says.

Stay safe everyone in France. This stormy gale force weather is wild. x

@TheLocalFrance Tell me about it – Armageddon in Charente at the moment!!

Météo France expects "unusually" intense downpours, which could see 60mm to 70mm of rain fall in a short time and warns that the storms may be accompanied by hail.

Météo France said gales of up to 100kp/h were also expected as the storms sweep across the country.