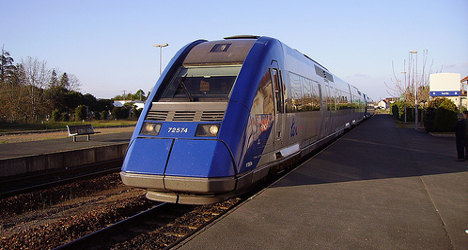 France orders 2,000 new trains but the only problem is, they are too wide for hundreds of stations. Photo: JPC24M

A misjudgement of just a few centimetres is set to cost French rail operators tens of millions of euros, it was revealed this week.

After ordering around 330 new trains for its regional network a slight problem has emerged – the trains are too wide to be able to pass through hundreds of stations across the country, the satirical weekly Le Canard Enchaîne revealed on Wednesday.

Costly repair works have already been carried to around 300 of the 1,300 platforms that need cutting back  to accommodate the new trains that will be rolled out from 2016.

"This is hugely embarrassing and it's not the first time they have made mistakes with platforms," Jean-Claude Delarue from SOS-Usagers told The Local on Wednesday. "It shows these bureaucrats are not in touch with the real situation.

"It's outrageous how much money they have wasted."

According to reports the huge blunder came about when track operators RFF handed over the wrong dimensions for its platforms to the train operators SNCF, who then put their order in to several engineering companies including Alstom.

RFF's measurements related to platforms built less than 30 years ago, but in reality most of France's regional platforms are far older and were not built to any standard size. It appears that SNCF did not send out any engineers to double check the measurements were correct.

The costly gaffe was admitted by red-faced rail chiefs on Wednesday.

“We discovered the problem a bit late, we recognize that and we accept responsibility on that score,” Christophe Piednoel, from the France’s national rail operator RFF, told France Info Radio.

Later on Europe1 radio RFF president Jacques Rapoport acknowledged to having discovered the misjudgment “a little late” but tried to play down the blunder by suggesting the modifications of the platforms was normal in order to improve accessibility.

“We need to focus on making our trains accessible to people with reduced mobility and thus make sure the trains are just next to the platform, which are 150 years old.

“These trains are new. Whenever we introduce new rolling stock, we need to change the infrastructure,” he said.

"It can involve chipping a few centimetres off the edge of a platform, or moving an electricity power box located a bit too close to the platform edge," said RFF.

"It's a bit like buying a Ferrari that you want to fit into your garage, but then realising your garage isn't quite Ferrari-sized, because up until now you didn't own a Ferrari," it offered by way of analogy.

Rapoport insisted however that customers would not be paying for the alterations through raised ticket prices.

“We have €50 million to pay for the adaptations from the billions invested in the rolling stock. It is less than one percent of expenditure,” he said.

France's Minister of Transport Frederic Culliver called the blunder "mindboggling" and "tragically comical" and pointed the finger of blame at France's "absurd rail system" which sees track operators RFF split from SNCF, which is in charge of the country's trains.

Train users agree and want the government to speed up plans to bring the two groups together.

"They should never have been separated back in 1977," SOS-Usagers' Delarue told The Local. "For many years they were unable to even have any dialogue together but things are slowly improving at least. The government is setting up a third company to work with both operators and that can't happen soon enough."

The two bodies are to be merged into one under reform plans to be unveiled in June.

The spotlight was thrown on France's ageing regional rail network last July when a train derailed at a station outside Paris, leaving seven people dead.

Inadequate safety checks and loose bolts were blamed for the crash.

Transport chiefs said the network had been neglected over the years while money was poured into the country's prestigious high-speed TGV network.