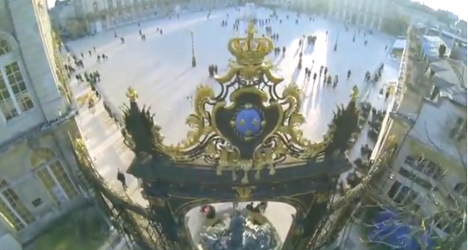 A French teen's stunning video made with a drone has netted him €400 in fines. Photo: Screengrab/YouTube

A French teenager won’t have to go to jail for an unauthorized drone flight he made over an historic French city, but it’s still going to cost him.

A judge decided this week that €400 was a fair penalty for 18-year-old Nans Thomas after he pleaded guilty to charges of endangering the lives of others and failure to comply with French aviation law for sending a drone into the skies above Nancy in January.

“I feel like I have been treated like a criminal. I’ve also been overwhelmed by the media attention, but I’ve stayed humble with the help of my family,” Thomas told AFP. He says he's thinking about “moving to Spain or Portugal where the legislation around flying drones is less strict.”

The case was France’s first-ever prosecution of this type, which drew worldwide attention, and prompted both large-scale support and harsh criticism of Thomas online.

The trouble started in January when he filmed “Nancy seen from the air” (Nancy vu du ciel) a stunning short film that quickly racked up some 400,000 views online in a matter of days.

The beautiful images of intricate facades, church spires and the renowned public plaza of the historic north-eastern French town were filmed by attaching a GoPro camera to his drone.

But it was the film’s success that was ultimately Thomas’s undoing. French civil aviation authorities caught wind of it and ordered an investigation that prompted Nancy’s top prosecutor to file charges on two counts.

First, drone operators in France have to complete a training course similar to the ones pilots must take. Then, a drone flight over an urban area requires specific written approval. But Thomas had neither the approval, nor had he done the course.

“I had no idea you needed permission (to fly it),” Thomas told French paper Est Republican. “Nobody gave me any indication that I needed any special permission when I bought it on the internet.”

Prosecutors were not impressed by Thomas's project.

“If the aircraft crashed in a densely populated area, the consequences can be tragic,” prosecutors told Est Republican previously. “The use of drones also raises the question of respect of people’s privacy.”

Here is the video. It may be have been shot illegally, but the views are certainly impressive.

Thomas's case does not look like being the last involving drones to end up in a French court house.

In February The Local reported how a French Foreign Legionnaire was arrested for flying a drone around the Eiffel Tower in Paris.