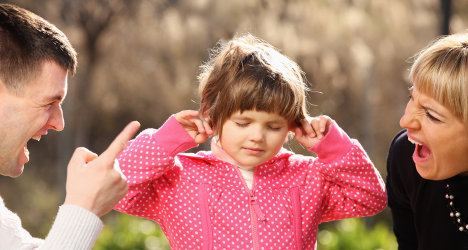 Raising kids to be bilingual can cause problems, but it doesn't have to. Photo: Shutterstock

France can be a great place to live for Anglos, but it brings with it a few challenges that you normally wouldn’t be obliged to deal with back home.

Chief among them, if you have kids that is, is deciding what strategy you’d like to adopt to get your children to become fluent in both French and English. For some parents it might not even be an issue but for others, particularly when the couple are dual nationality, it can cause a fair bit of stress.

“It’s definitely something you need to invest a lot of effort in,” Joseph Bamat, who has two sons Orelio, five and Joaquim, two, with his French wife Ines Giron, tells The Local. “And yes, it led to a certain amount of frustration and tension on both sides.

“I mostly spoke French with my wife, but when my first son was born I remember saying to her that I would be speaking a lot more English from now on, and that didn’t go down too well.”

Those tensions can increase when one language seems to develop quicker and even at the expense of the other, which is often the case when children go off to school in France and suddenly they are much more exposed to French.

“Before my eldest son went to school it was around 50-50 French and English at home and they would pick up words from both languages at the same rate,” Bamat, a Paris-based journalist says.

“But then after he went to school I realized his English was not up to the same standard as his French. You do get jealous, because there’s a certain amount of competition going on.

“I realized then that if I didn’t make an effort his English would dip."

That experience brought about a slight change in tactics when it came to dealing with his youngest child, thanks to the advice of some fellow Anglo-French parents in a similar situation.

“With the second one I started insisting more that he respond to me in English. It’s harder and that can become a source of tension because he doesn’t want to have to think about what to say all the time.

“It certainly brings about more confrontations but it’s probably worth it,” Bamat says.

For Ed Hayes, another Anglo parent in Paris, he used a slightly different tactic with his two daughters Lucie, aged five and Emma, aged three.

"I found it difficult when I wasn't sure they actually understood me when I spoke in English, so I would often repeat things in French to them. Obviously my wife Karen, who was born in France, didn't have that problem," Hayes, from UK, tells The Local.

"I am conscious of the fact that they are not immersed in English as they are with their mother tongue French, so I do make sure they are learning it."

However, raising kids to be bilingual doesn’t have to be the burden or the source of worry that it's often built up to be.

"I never read any books about it because I wasn't so worried," says Hayes. "As a couple we spoke English together at home so I knew they would pick things up."

Both agree that after a while raising kids to speak both languages quickly blends in with the overall job of being a parent.

“It seems at first it might be difficult but it becomes natural after a while. There’s something instinctive that takes over,” Bamat says.

“Yes it might be something that most other parents don’t have to think about, but it soon becomes like any other parental task, like making sure they have baths when they need to or eat their dinner when they have to.

“The most important thing is just making sure your kids are happy,” says Bamat.

And it does have its bonuses Hayes says.

"Sometimes if they can't make themselves understood in English, they will say it in French with an English accent. It's very cute," he says.

Just in case you would like some tips on how to do it, we have spoken to an expert who has worked in the field of language training for 20 years. To see what he has to say, click on the link below.

The dos and don'ts of raising bilingual kids in France