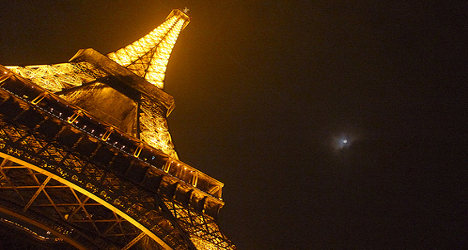 An intoxicated man climbed some 30 metres up the Eiffel Tower in the early hours of Saturday morning before police convinced him to climb back down.

Police in the posh 7th arrondissement got a call around 3:15am alerting them to the fact a man was attempting to scale the legendary Iron Lady. Sure enough, once on scene the officers spotted the man about 30 metres above the Champ de Mars park, AFP reported.

After brief negotiations the man, who was in his 30s, agreed to come back down. Police didn’t provide a very clear reason as to why the man had decided to mount the monument, except to say: “Basically, he was drunk.”

After his little adventure the impromptu climber was arrested, charged and has been ordered to appear before court, sources told French media.

This wouldn't be the first strange, funny or dangerous incident in the 125 years the tower has stood in Paris. Last year an artist was arrested for dancing with a rooster tied to his penis underneath the tower and The Local reported how a French Foreign Legionnaire was arrested for flying an unauthorized drone at the tourist site, earlier this year.

If you want to see a video of a man climbing the Eiffel Tower, then check this one out below. In this case the climber was certainly not drunk.