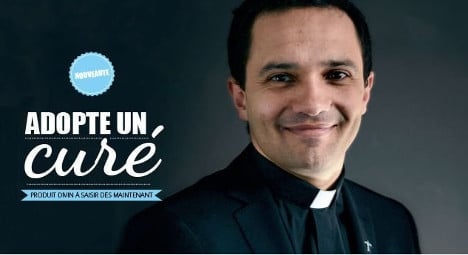 "Adopt a priest" - the news campaign from the Catholic church, offering "divine products" in the hope of raising donations has caused a few ripples. Photo: Screengrab

The video, with a soundtrack of soaring choral music, opens on a soft-eyed young man in a priest collar who the narrator proceeds to refer to as a “100 percent divine product”. Graphics pop up and explain his powers of listening, that are available "even on Sunday."

Though it’s the kind of slick modern ad you might expect from a major car company or clothing label, it’s the centerpiece of a new fundraising campaign coming from one of France’s most conservative and traditional institutions: the Catholic Church.

While just the images and tone are a departure for the church, the campaign’s name has also got some edgy tension in it. It’s called ‘Adopte un curé” (Adopte a priest) inspired by a popular French, female-oriented dating site “Adopte un mec” (Adopte a guy).

The intended edginess is all part of an attempt by six dioceses in Normandy to replenish their dwindling pool of donors.

This campaign, put together by the Alteriade agency out of Lyon, is seeking to capture just that group. The ad is aimed at the 18-40 demographic with an online-only campaign.

“The Dioceses wanted to modernize the image of the church’s annual donation drive by targeting 18-40 years olds,” Vicar-general of the Calvados Diocese Xavier Signargout told French media. “Humour allows us to evoke fundraising in a funny way.”

The campaign has prompted exactly the kind of buzz its creators were seeking. TF1 television posted a story on its site about the campaign under the heading “unusual”, while daily paper Le Parisien remarked on the “seductive and smiling” face of the young priest in the video.

French news magazine Le Point calls it “The shock campaign of the Normandy Church.” However, the stories are mostly positive and point out how the church is simply modernizing its appeal for cash.

"The dioceses of Normandy are not afraid to "be modern" in order to attract donors," wrote France Televisions.

The church’s willingness to test out a risky campaign seems to be in part related to tough times. Of some 3.4 million declared Catholics in Normandy, only about 80,000 are donors. That number is dropping every year, Le Point reported.

Here's the video, which is all in French: