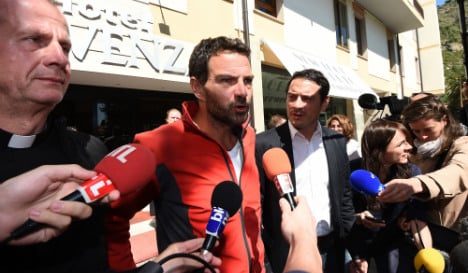 Issuing a statement from the Italian border town of Ventimiglia, Kerviel said he wished to detail "all the serious failings" that led to his conviction after he brought one of Europe's biggest banks to the brink of bankruptcy in 2008.

Aides to Hollande said Saturday they would consider a request from Kerviel for a presidential pardon over his role in the loss of nearly five billion euros through wildly risky trades.

The former Société Générale trader says he is not seeking a pardon, but rather immunity for potential witnesses who could testify in his favour.

"I am waiting on the Italian side for a response from the president of the republic on the immunity I am seeking for people who are prepared to talk," he said in the statement.

Kerviel is subject to an order to present himself at a French police station by Sunday to start serving his sentence.

His lawyers said they would be heading to Paris Sunday evening and would be "available" to discuss the case with the president or his staff.

His defence asked the state prosecution to suspend the application of his prison sentence, which must begin at any point within five years of the verdict under French law.

"There is no urgency in jailing him, other than to silence him," the statement said.

Kerviel, 37, has spent the last two months on a walk from Rome intended to raise awareness of what he regards as the unfair treatment he has received from the courts.

One of his supporters, the priest Patrice Gourrier, who has been walking at his side, announced he would fast until the sentence was suspended.

By staying in Italy, Kerviel risks further charges over his defiance of a judicial system that had appeared lenient in not insisting on his returning to France immediately after his conviction was upheld on appeal in March.