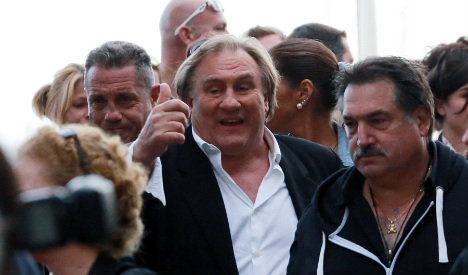 Far from being shown in one of the big, plush theatres in the festival hall, the film starring Gerard Depardieu as a man with striking similarities to "DSK", whose alleged 2011 sexual assault on a New York hotel maid shook the world, was screened in a small, local cinema.

"Do you know who I am?" read the poster advertising the film "Welcome to New York", as a handcuffed, suited man seen from behind faced flashing photographers with the gleaming lights of New York in the background.

The première of the film by US director Ferrara during the Cannes Film Festival had caused a scrum among film buffs and journalists alike, all keen to get hold of one of the 500 seats available in the cinema.

At a press conference after the film, Depardieu said the film was a "unique adventure because it's drawn from a news item that everyone has read".

"Power, money, sex, there's everything from a Shakespearian tragedy," he told reporters alongside Ferrara and his co-star Jacqueline Bisset. The start of Ferrara's film states that it is inspired by a court case but it has been widely seen as a fictionalised account of the downfall of a man who was once a strong contender to become president of France.

Strauss-Kahn was arrested in May 2011 as he boarded a plane in New York heading back to Paris, and was forced to live under house arrest for weeks after posting $1 million bail.

Criminal charges in the case were eventually dropped and at the end of 2012, Strauss-Kahn settled a civil suit brought by the maid by paying her undisclosed damages, which reportedly exceeded $1.5 million.

The film portrays the downfall of a powerful man whose high sex drive has made him sick, and there is no shortage of explicit sex scenes.

Ferrara races through the case itself and ends up devoting a lot of time to the conversations taking place after the scandal erupted between Devereaux and his wife Simone, played by Bisset.

"He actually has some of the real police from the actual case playing the cops in the movie and he also films in the real apartment in downtown New York where DSK and (then wife) Anne Sinclair were living during the house arrest period.

"So in that sense, there are some things that are very much taken from reality."

Producer Vincent Maraval said there had been no reaction so far by Strauss-Kahn or Sinclair, who are now divorced.

Asked whether he was worried about any potential legal consequences, Maraval said the film was a US production and therefore came under US law.

"We consulted every necessary lawyer, the lawyers saw the film, they saw the script, and they granted us an insurance, which means that the film has no legal problems," he said.

Acclaimed as one of the greatest actors of his generation, Depardieu has become as famous in recent years for his off-screen antics as for his performing talents.

The star announced in November 2012 that he was moving abroad after President Francois Hollande's Socialist government sought to impose a 75-percent tax rate on annual incomes over one million euros ($1.37 million).

He took up residency in Belgium and was granted Russian citizenship by President Vladimir Putin. The decision sparked controversy, as have his friendships with Putin and Chechnya's strongman leader Ramzan Kadyrov.

Initial reactions to the film were mixed, but many critics and viewers lauded Depardieu's performance as a superb return to form.

"I think that Depardieu's performance is fantastic, and the film is very interesting," French director Claude Lelouch said after the screening.

"And in particular, there is Gerard's courage as an actor. I think he has more courage than any other living actor today," he said.

But other viewers were less complimentary.

"It's beyond bad, it's embarrassing, it's in bad taste," one person said.