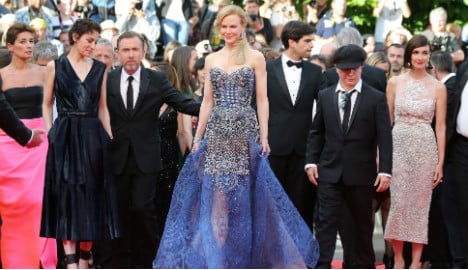 Nicole Kidman arrives for the première of "Grace of Monaco". Photo: AFP

Behind the scenes at the Cannes Film Festival on Saturday:

HE WON'T BE INVITED AGAIN: He just loves celebrities — so much so that he wants to hug them.

And that's exactly what a 26-year-old Ukrainian journalist did when he burst onto the red carpet Friday night, threw himself to the ground and put his hands round "Ugly Betty" actress America Ferrera's ankles for a few seconds.

Celebrity prankster Vitalii Sediuk, clad in a tuxedo, was rapidly escorted out by security officials and taken to the police station, and the US actress continued her walk up the steps.

While police refuse to reveal his identity, they say the man has a long record of ankle-grabbing and hugging, having already vented his affection on Will Smith, Madonna, British singer Adele and Leonardo DiCaprio.

TOO EARLY FOR COMFORT? It seems the tragic disappearance of Malaysia Airlines flight MH370 with 239 people on board is already being used as fodder for a new film.

Advertised on the back of the Hollywood Reporter entertainment-trade magazine, "The Vanishing Act" features a plane rising out of the clouds under the caption "The untold story of the missing Malaysian plane."

His personal website says Paul "redefines all-round talent" and "his free spirit has been prized and puzzled by many."

WHERE'S GRACE? Harvey Weinstein finally made it to Cannes after a trip with his wife Georgina Chapman to Syrian refugee camps in Jordan.

The Hollywood mogul was pointedly absent from the world première of "Grace of Monaco" on Wednesday, the festival's much-maligned opening film that he is distributing in the United States.

Weinstein has feuded with French director Olivier Dahan over the final version of the film, and while they finally reached an agreement this week to distribute the director's edit, it looks like Harvey is less than happy with the movie.

According to the Hollywood Reporter, "Grace of Monaco" was conspicuously missing from the film mogul's preview of The Weinstein Co.'s upcoming slate presented at the luxury Majestic Hotel.

Cornered by reporters, he admitted "that the Monaco royal family, which has objected to the film, has a 'legitimate problem' with the movie", suggesting there was an unspecified scene he would like to add back into the movie that would address their concerns.