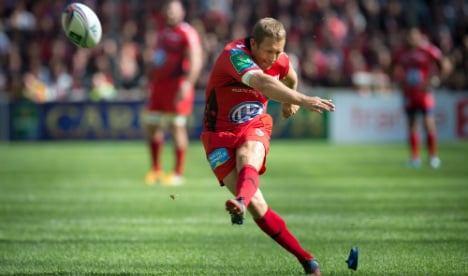 Matt Giteau scored the only try of the game, in the 12th minute, with Wilkinson scoring the rest through a conversion, two penalties and a drop-goal.

Racing had just two Jonathan Sexton penalties, in the 15th and 31st minutes, to their name.

Toulon will now play the winner of Saturday's second semi-final between Montpellier and Castres in the May 31 final at the Stade de France.

"I know very well that I'm very lucky to play two finals, to play for this club and in France, a tricky championship," said Wilkinson.

"It's a very great privilege to play a season like this and I hope to see more of them."

"It wasn't very good for us mentally and in the second-half, Toulon dominated and that made the difference," he said.

"We couldn't put our gameplan in place. We obvisouly very disappointed. Now it's time to study what happened, then some goodbyes to many friends, it's complicated."

After a hard-hitting opening, the first try came after Springbok winger Bryan Habana was shoulder-charged into touch by Juan Imhoff chasing a ball down the line.

While Habana went sprawling, the ball stayed in play and Australian veteran Giteau's keen follow-up paid off with a smart pick up to squirt over the line, Wilkinson making no mistake with the extras.

Toulon centre Mathieu Bastareuad was then yellow-carded for a spear tackle, but Sexton was off target with his second penalty after a high Delon Armitage tackle.

In an uncharacteristically off-kicking night, Wilkinson saw a penalty come back off the posts, as did Sexton's drop-goal on the whistle for half time, 7-6 in Toulon's favour.

Wilkinson bagged a penalty just minutes into the second period as Toulon strangled the life out of Racing with some no-nonsense defence that snuffed out any threat of real ball-in-hand attacking play.

Another penalty increased the daylight, and with 10 minutes to play, Wilkinson jinked back in off his favoured left foot to nail a comfortable right-footed drop-goal to stretch the lead to 10 points.

Toulon easily weathered the predictable final storm by the Parisian club and will now look forward in confident fashion to playing either Montpellier or Castres to claim their first title since 1992.