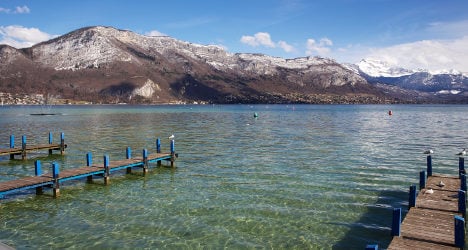 Annecy has a clean lake, but a new study says its air second worst in FrancePhoto: Fabrice Coppee/AFP

Annecy touts itself as being the home of “Europe’s cleanest lake”, kept pristine by decades of tough environmental regulations. It’s air, however, is another matter.

Annecy and the nearby town of Annemasse had the second and third worst air quality in France on a World Health Organization table released recently that looked at pollution levels in nearly 1,600 cities in 91 countries around the world, for the years 2008-2013.

The study shows Annecy had a high concentration of the most dangerous fine particles, called PM 2.5, with an average of 25 micrograms per cubic metre of air. Annemasse was close behind with 23 per cubic metre. The particles particularly pose a risk to those with pre-existing breathing problems, but are generally harmful for everyone.

The fact the air in the Alps is not as fresh as we might think has long been an issue of concern for local authorities, who have tried to implement various strategies over the years to solve the problem.

“Dear tourists, watch out for your lungs as you take in the summit of Mont Blanc,” wrote Alps-area green party lawmaker Claude Comet in 2011. “While the air is clear, it’s not that pure.”

Environmental groups have regularly held protests to try to force authorities to take bold action. In November last year protesters blocked the road leading to the Mont Blanc tunnel, demanding that the most pollutant trucks are taken off the roads.

The reason the Alps' air is polluted is due in large part to the local weather conditions. The presence of cold, dry air traps pollution from traffic and local industries close to the ground instead of letting it be carried away by the wind.

Due to the rural nature of the area and the close proximity of the major urban centre of Geneva as well as the high-traffic area at the Mont Blanc tunnel, a constant flow of road traffic is pumping the fine particles into the air.

Top of the table for the most polluted town in France was Douai in the north east of the country. It had the worst air in France, with 26 micrograms of fine, harmful particles per unit of air, which landed it the 440th spot on the global ranking. While bad for France, these levels are far behind the city which the report ranked as have the world’s most polluted air, Delhi in India.

The report showed it had a whopping 153 micrograms per cubic metre of air of the smallest and most harmful particles. The air in the Indian capital is nearly six times more polluted than the worst in France.

Interestingly enough, it was a scruffy, working class Parisian suburb that had some of the best air in the country. The town of Saint Denis was the only place in France that met or came under the recommended air quality levels of the WHO.

The issue of air pollution in France made headlines around the world in spring, when authorities in Paris imposed driving restrictions and made public transport free in a bid to try and cut soaring levels of dirty particles in the air.